Iraq’s Bishop Warduni: Our Christians preferred Christ to their homes 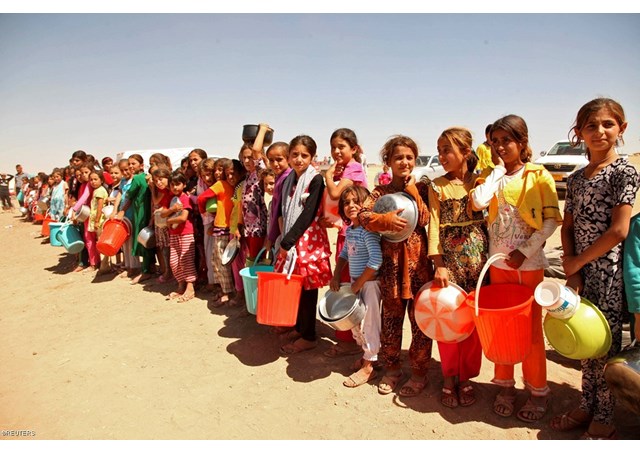 (Vatican Radio)  International help came too little, and “a bit late” for Iraq’s Christians and Yazidi minorities being targeted by Islamic State militants in their campaign to create an Islamic caliphate in the region.  That’s according to Bishop Shlemon Warduni, President of Caritas Iraq who says the plight of Iraq’s minorities was ignored by the U.N., Europe and America which “did not do a good job” at the beginning of the conflict this summer and “they came to aid us a little bit late.”

Listen to Tracey McClure’s interview with Bishop Warduni on the sidelines of a high-level Caritas Internationalis meeting in Rome on the crisis in the Middle East:

The U.S. has conducted more than 150 air strikes against the extremist group in Iraq and forms part of an evolving coalition of some forty states committed to fighting Islamic State militants (“Daesh” in Arabic).

Bishop Warduni laments a weak Iraqi government and army for the collapse of Mosul and Ninevah which were overrun by Islamic State fighters in a matter of hours in June.

Our Christians preferred Christ to their homes

120,000 terrified Christians were forced to leave communities in the Ninevah plains, and more than 30,000 fled Mosul, one of Iraq’s biggest cities, after Islamic State threatened them with death if they failed to convert to their strict brand of Islam. Many fled with just the clothes on their backs, leaving everything they owned behind.  “Thanks God our people are strong in the faith,” Bishop Warduni adds,  “they preferred Christ to their homes or properties.”

The Christians have taken refuge in Christian villages in northern Iraq, in churches and schools and anywhere they can find a roof over their heads, the Iraqi Bishop explains. He adds that temperatures exceeded 48° c. in the summer months making conditions extremely difficult for the displaced families.  “At the beginning it was very, very hot … and they were without shoes, just in their clothes that they had on their body (when they escaped).  You cannot imagine how it was.”

“Iraq is… the country of wars,” Bishop Warduni sighs.  “We were living with Muslims and others but we were not prepared – never, never – for this situation. And Caritas must do something for them. Because our Lord said: whatever you are doing for any small one of my brothers, you are doing for Me. And He also told us to love one another…how did He love us?  He loved us on the Cross.  So, He asks from every Christian to do like Him: to love the others as ourselves.  To sacrifice for them also, even in our life.”

Caritas reaches out to Iraq’s displaced

Bishop Warduni explains that Caritas lost precious time in getting its team on the ground to respond to the crisis because they had to locate staff who had escaped with other Christians fleeing ISIS.  The displaced “need first of all to eat, and medicines and clothes,” he points out, adding that Caritas and other organizations are trying to deliver some forms of shelter to protect them from the elements.  So far, Caritas has helped more than 7,500 families.

Bishop Warduni does not exclude the use of force to defeat IS, but says it is necessary to get at the root of the problem by stopping arms sales to the militants and the sale of oil by IS, and  by excluding from the international community countries that help the militants.   An international peace force will also be needed, he notes, to protect and liberate the local population and prevent IS from returning – a fear shared by many Iraqis today.