IOR Board of Superintendence complete 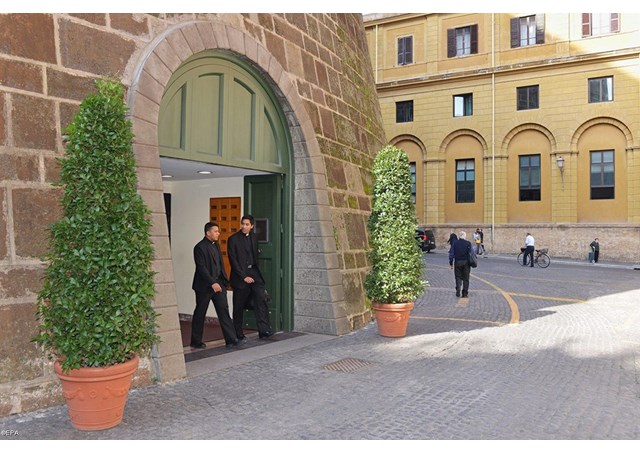 (Vatican Radio) The group of Cardinals called to oversee the Institute for the Works of Religion has appointed two new members to the IOR Board of Superintendence.

A Vatican statement on Tuesday said the IOR Board of Superintendence is now complete with the nominations of Mauricio Larraín and Carlo Salvatori.

The Commission, which oversees the body known as the "Vatican Bank", was reshuffled last January.

Please find below the full text of the Vatican statement:

IOR Board of Superintendence completed with nominations of Mauricio Larraín and Carlo Salvatori.

The Cardinals’ Commission of the Istituto per le Opere di Religione (IOR) has appointed Mr. Mauricio Larraín (Chile) and Mr. Carlo Salvatori (Italy) as members to the IOR Board of Superintendence.

On the occasion of the nomination Cardinal Santos Abril y Castelló, President of the IOR’s Supervisory Commission of Cardinals, said: “The IOR is looking forward to working with these two new board members who will add significant financial experience and global perspective at a time when the role of IOR is being reinforced and confirmed to meet the objectives of the Holy Father.”

With these appointments, the IOR Board of Superintendence is now complete. Besides Mauricio Larraín and Carlo Salvatori, it is composed of Mr. Jean-Baptiste de Franssu (France), President of the Board, Mr. Clemens Boersig (Germany), Prof. Mary Ann Glendon (USA) and Sir Michael Hintze (UK), who assumed office on 9 July 2014. In addition to these six lay members of the Board, Monsignor Alfred Xuereb, Secretary-General of the Secretariat for the
Economy, serves as its non-voting Secretary.

Background on the new members of the IOR Board of Superintendence

Mauricio Larraín is External Director of Santander Bank Group Chile and General Director of the ESE Business School from the Los Andes University of Chile. He has served as the Santander Bank Group Chile’s Chairman and General Director from 1992 until 2014 and has been President of Santander Chile Holding S.A. and Universia Chile S.A. from 2000 until 2014. During this period, Santander Bank Group Chile was chosen as the Best Bank in Latin America
in six different years by the América Economía Magazine. Before joining Santander, Mauricio Larraín was Senior Finance Specialist at the World Bank in Washington D.C., Manager of External Debt at the Central Bank of Chile and Deputy Superintendent of Banks of the Superintendence of Banks of Chile. He was awarded several prizes for his executive achievements. In 2008, he received the Estrategia Newspaper Award for Best Executive. In 2007, he was selected among the 3 Best Executives and Managers of Chile by Adimark GfK/La Segunda Newspaper, and in 2004, he was chosen as one of the 10 Best Executives of Chile in 20 years by the newspaper La Tercera of the Pontifical Catholic University of Chile. Mauricio Larraín holds degrees in Law and Economics (candidate) from the Pontifical Catholic University of Chile and a degree in Law from Harvard University. Born on 31 July 1950, he is married and
has six children.

Carlo Salvatori serves as President of the investment bank Lazard Italy since June 2010 and of the insurance company Allianz SpA since May 2012. Furthermore, he is member of the Board of Directors of the Università Cattolica del Sacro Cuore, of the Bambino Gesù Children’s Hospital, of Chiesi Pharmaceuticals and of the Riso Gallo Group and he also is President of the Christian Union of Business Executives’ Milanese section. Carlo Salvatori assumed various high-rank executive positions in the Italian banking industry: Among others, he served as Managing Director of Unipol Gruppo Finanziario, as President of UniCredit and as Vice President of Mediobanca. He also was Managing Director and CEO of Banca Intesa, of Cariplo and of Banco Ambrosiano Veneto as well as Central Director of BNL. Furthermore, he served as Chairman of the Supervisory Board of Bank Austria in Vienna, and as Board member of HypoVereinsbank in Munich, Germany. Carlo Salvatori holds a degree in Economy and Commerce from the University of Bologna, a degree in Banking from the University of Siena and received a Honoris Causa degree in Political Sciences from the University of Macerata. He was born in Sora (Frosinone, Italy) on 7 July 1941, is married and has three children.