Pope at Mass: love your enemies 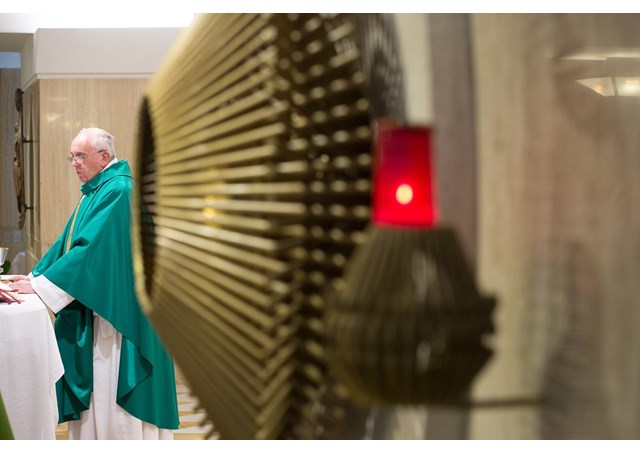 (Vatican Radio) Pope Francis celebrated Mass in the chapel of the Santa Marta residence at the Vatican on Thursday morning. In remarks to the gathered faithful following the readings of the day, the Holy Father focused on the Gospel command to love our enemies.

The Gospel reading was from that according to St. Luke (6:27-38), in which the Lord tells his disciples, “[L]ove your enemies, do good to those who hate you, bless those who curse you, pray for those who mistreat you.” The Holy Father said that this is a model of Christian life – of unconditional love in action. “Do good,” he said, “lend without hoping to have back what you have lent – [act] without interest, and your reward will be great,” he said. Pope Francis also recognized that this new way of the Gospel is one by which it is often difficult to live:

“‘But Father’ [one might say], ‘I don’t feel like behaving that way’. ‘Well’, [one might reply], ‘if you don’t feel like it, that’s your problem, but that’s the Christian way.” This is that way that Jesus teaches us. ‘And what can I hope?’ [one might ask]. Go on Jesus’ way, which is the way of mercy. Be merciful as your Father is merciful. Only with a merciful heart can we do all that, which the Lord counsels us to do – all the way. The Christian life is not a navel-gazing [It. autoreferenziale] one. It is a life in which one gets out of oneself in order to give oneself to others. It is a gift, it is love – and love does not turn in on itself, it is not selfish, but self-giving.”

The Lord asks us to be merciful. He asks us not to judge. Often, said Pope Francis, “It seems that we have been named judges of others: engaging in gossip, talking behind people’s backs, we judge everyone.” The Lord, however tells us not to judge, lest we be judged ourselves. “Do not condemn [others],” said Pope Francis, “and you will not be condemned.” The Lord asks us to forgive, that we might be forgiven. “We say it every day in the Our Father,” noted the Holy Father, “forgive us as we forgive others – and if I do not forgive, how can I ask the Father to forgive me?”:

“This is the Christian life. ‘But Father, this is folly!’ one might say. ‘Yes’, one might answer, ‘it is’. We have heard in these days, though, St Paul, who said the same: the foolishness of the Cross of Christ, which has nothing to do with the wisdom of the world. ‘But Father, to be Christian is to become some sort of fool?’ [one might ask]. ‘Yes’, [I would say], ‘in a certain sense, yes. It means renouncing the cunning of the world in order to do everything that Jesus tells us to do and that, if we do the sums, if we balance the ledger, seems to be against us.”

The Holy Father went on to explain that the way the Lord teaches us is the way of magnanimity, of generosity, of self-giving without measure. “It was for this,” he said, “that Jesus came into the world,” not to judge, not to engage in idle gossip, not to pass judgments, but to give and to forgive. “Being Christian isn’t easy,” said Pope Francis, adding that we can become Christians only by the grace of God, and not by our own strength:

“Here then arises the problem that we all must face daily: ‘Lord, give me the grace to become a good Christian, because I cannot do it on my own’. This is something quite frightening at first glance – quite frightening, indeed. If, however, we take the Gospel and we read the 6th chapter of St. Luke – and reread it and reread it and reread it – and let us do so – and let us ask the Lord for the grace to understand what it is to be a Christian, to understand the grace He gives to us Christians, as well, because we cannot do it on our own."