Synod: The Church assembles for the family 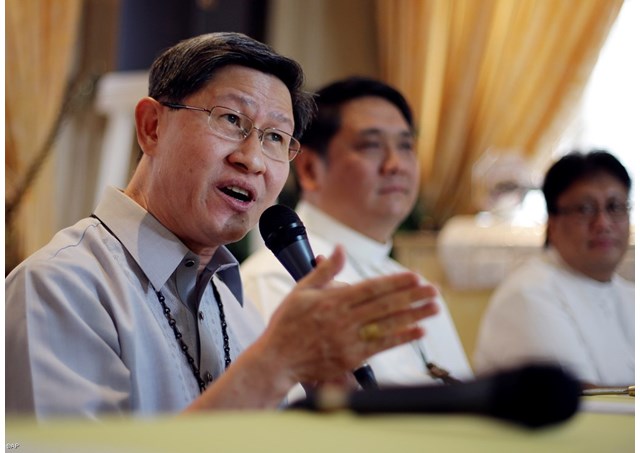 (Vatican Radio) “This Extraordinary Synod is linked to the ordinary Synod that will happen next year, so this is quite unique in the history of the Synod of Bishops – two consecutive assemblies that are linked in process and in theme – the family”, says Cardinal Luis Antonio G. TAGLE, Archbishop of Manila and one of the three delegate presidents of the Extraordinary General Assembly of the Synod of Bishops (5-19 October).

The theme of the two week assembly will gather 253 men and women representing the Universal Church to discuss and reflect on the theme: “Pastoral challenges to the family in the context of evangelization”.

Speaking to Emer McCarthy Card. Tagle underscores that this Extraordinary assembly of the Synod is the first part of a two phase process and its purpose is to offer a place for discussion and reflection rather than decision making:

Listen to our interview:

“This first gathering, according to the Holy Father will set the status quaestionis. With the help of experts and observers we want to see the situation of the family in different parts of the world.  Attending the preparatory meetings one thing I realized is the diversity of the situations and pastoral challenges and it’s exciting to see how the one Gospel the one Truth that we hold on to can be expressed pastorally in diverse ways”.

Presenting the list of participants to press at the Vatican Tuesday Cardinal Lorenzo Baldisseri, secretary general of the Synod of Bishops, said the Extraordinary General Assembly of 2014 and the Ordinary General Assembly of 2015 represent “a new working methodology” for the Synod of bishops “rendering the process more dynamic and participatory, with speeches and testimonials, always with a view to continuity towards the second stage, after which the Synod document will be published”.

Participants from all 5 continents include: 114 presidents of Episcopal Conferences, 13 heads of the 'sui iuris' Eastern Catholic Churches, 25 heads of the dicasteries of the Roman Curia, 9 members of the Ordinary Council of the Secretariat, the secretary general, the under-secretary, 3 nominees from the Union of Superior Generals, and 26 pontifical nominees. Other participants include 8 fraternal delegates, 38 auditors, including 13 married couples, and 16 experts.

A. LIST OF SYNOD FATHERS ACCORDING TO ORDER OF PARTICIPATION

VI. COMMISSION FOR THE MESSAGE

Synod of the Coptic Catholic Church

His Beatitude Ibrahim Isaac SIDRAK, Patriarch of Alexandria of the Copts, Head of the Synod of the Coptic Catholic Church

Synod of the Syriac Catholic Church

His Beatitude Ignace Youssif III YOUNAN, Patriarch of Antioch of the Syrians, Head of the Synod of the Syriac Catholic Church

Synod of the Maronite Catholic Church

Synod of the Chaldean Catholic Church

Synod of the Armenian Catholic Church

Synod of the Greek-Catholic Ukrainian Church

His Beatitude Sviatoslav SHEVCHUK, major archbishop of Kyiv-Haly?, Head of the Synod of the Greek-Catholic Ukrainian Church

Synod of the Syro-Malabar Church

Synod of the Romanian Church

Council of the Ethiopian Church

Archbishop William Charles SKURLA, metropolitan of Pittsburgh of the Byzantines, president of the Council of the Ruthenian Catholic Church

Archbishop Jan BABJAK, S.J., metropolitan of Prešov for Catholics of Byzantine rite, president of the Council of the Slovak Church

VIII. PRESIDENTS OF THE EPISCOPAL CONFERENCES

Archbishop Berhaneyesus Demerew SOURAPHIEL, C.M., of Addis Abeba, president of the Council of the Ethiopian Church

His Beatitude Fouad TWAL, Patriarch of Jerusalem of the Latins

Bishop Basílio DO NASCIMENTO of Baucau

Archbishop Thomas MERAM of Urmy?, Urmia, Rezayeh of the Chaldeans, deputy president of the Episcopal Conference

Archbishop Tomash PETA of Mary Most Holy in Astana

Archbishop Socrates B. VILLEGAS of Lingayen-Dagupan

Archbishop Paolo PEZZI, F.S.C.B., of Mother of God at Moscow

Bishop Franghískos PAPAMANÓLIS, O.F.M. Cap., emeritus of Syros and Milos and of Santorini

Archbishop Mieczys?aw MOKRZYCKI of Lviv of the Latins

IX. NOMINEES FROM THE UNION OF SUPERIOR GENERALS

X. HEADS OF THE DICASTERIES OF THE ROMAN CURIA

Cardinal Gerhard Ludwig MÜLLER, prefect of the Congregration for the Doctrine of the Faith

Cardinal Leonardo SANDRI, prefect of the Congregration for the Oriental Churches

Cardinal Angelo AMATO, S.D.B., prefect of the Congregration for the Causes of Saints

Cardinal Marc OUELLET, P.S.S., prefect of the Congregration for Bishops

Cardinal Fernando FILONI, prefect of the Congregration for the Evangelisation of Peoples

Cardinal Beniamino STELLA, prefect of the Congregration for the Clergy

Cardinal João Braz de AVIZ, prefect of the Congregration for the Institutes of Consecrated Life and the Societies of Apostolic Life

Cardinal Zenon GROCHOLEWSKI, prefect of the Congregration for Catholic Education

Cardinal Raymond Leo BURKE, prefect of the Supreme Tribunal of the Apostolic Signatura

Cardinal Stanis?aw RY?KO, prefect of the Pontifical Council for the Laity

Archbishop Vincenzo PAGLIA, bishop emeritus of Terni-Narni-Amelia, president of the Pontifical Council for the Family

Archbishop Zygmunt ZIMOWSKI, bishop emeritus of Radom, president of the Pontifical Council for the Pastoral Care of Health Care Workers

Cardinal Gianfranco RAVASI, president of the Pontifical Council for Culture

Cardinal Domenico CALCAGNO, president of the Administration of the Patrimony of the Apostolic See

Cardinal Giuseppe VERSALDI, president of the Prefecture for the Economic Affairs of the Holy See

XI. MEMBERS OF THE ORDINARY COUNCIL

Cardinal George PELL, prefect of the Secretariat of the Economy, Vatican City

His Beatitude Sviatoslav SHEVCHUK, major archbishop of Kyiv-Haly?, Head of the Synod of the Greek-Catholic Ukrainian Church, Ukraine

Bishop Enrico SOLMI of Parma, president of the Commission for Life and the Family of the Italian Episcopal Conference, Italy

XIII. UNDER SECRETARY OF THE SYNOD OF BISHOPS

B LIST OF OTHER PARTICIPANTS ACCORDING TO ORDER OF PARTICIPATION

I. COLLABORATORS OF THE SPECIAL SECRETARY

Rev. Gérard BERLIET, professor of Sacred Scriptures in the provincial seminary of Lyons, head of pastoral care of divorced and remarried faithful for the diocese of Dijon, France

Rev. Fr. Alfonso FERNÁNDEZ BENITO, professor of moral theology and the sacrament of marriage in the “San Ildefonso” Higher Institute for Theological Studies, director of the Institute for Religious Sciences of Santa Maria de Toledo, Spain

Rev. Maurizio GRONCHI, professor and ordinary in dogmatic theology at the Urbanian Pontifical University of Rome; consultor of the Congregation for the Doctrine of the Faith, Italy

Jocelyne KHOUEIRY, member of the Episcopal Commission for the Family and Life, APECL, Lebanon

Christopher Laurence MENEY, director of the Centre for Life, Marriage and the Family of the archdiocese of Sydney, Australia

Giuseppina DE SIMONE in MIANO, extraordinary professor of philosophy at the Theological Faculty of Southern Italy in Naples, Italy

Francesco MIANO, professor and ordinary in moral philosophy at the “Tor Vergata” University of Rome and ex-president of Italian Catholic Action, Italy

Carmen PEÑA GARCÍA, specialist in marriage, professor in the faculty of canon law at the Pontifical University of Comillas, defender of the bond and promotor of justice of the Metropolitan Tribunal of Madrid, Spain

Arturo and Hermelinda AS ZAMBERLINE, heads of the “Équipe Notre-Dame” for the super-region of Brazil, Brazil

Zelmira María BOTTINI DE REY, director of the institute for Couples and Families of the Pontifical Catholic University of Argentina; president of the Latin-American Network of Institutes for the Family in Catholic Universities, Argentina

Joan CLEMENTS, director of the managing board of the World Organisation Ovulation Method Billings (WOOMB), Australia

Ms Pilar ESCUDERO DE JENSEN, member of the vicariate general for Pastoral Care of the archdiocese of Santiago de Chile; member of the Pontifical Council for the Laity; member of the Schoenstatt Institute for Families, Chile

Luis JENSEN ACUÑA, member of the Bioethical Centre of the Pontifical Catholic University of Chile; president of the “Fundación Médico Cultural Porta Vitae”; member of the Schoenstatt Institute for Families, Chile

Dr Ilva Myriam HOYOS CASTAÑEDA, delegate procurator for the Defence of the Rights of Childhood, Adolescence and the Family, Colombia

Sélim and Rita KHOURY, heads of the Office for Family Pastoral Care in the Patriarchal Curia of Antioch of the Maronites, Lebanon

María LACALLE NORIEGA, director of the Francisco de Vitoria Centre for Family Studies and Social and Economic Studies; secretary general of the Spanish Society for Bioethics and Biojustice, Spain

Rev. Cajetan MENEZES, director of the Apostolate for the Family in Bombay, India

Sister Margaret MULDOON, ex superior general of the Sisters of the Holy Family of Burdeos, Ireland

Francisco PADILLA, head of the Couples for Christ Movement Foundation for family and life, Philippines

Algirdas PETRONIS, deputy president of the International Federation for Catholic Families. Director of the Family Centre of the archdiocese of Vilnius, Lithuania

His Eminence ATHENAGORAS, metropolitan of Belgium

His Eminence HILARION, president of the Department of External Church Relations of the Patriarchate of Moscow, Russian Federation

Valérie DUVAL-POUJOL, professor of biblical exegesis at the Catholic Institute of Paris, France.