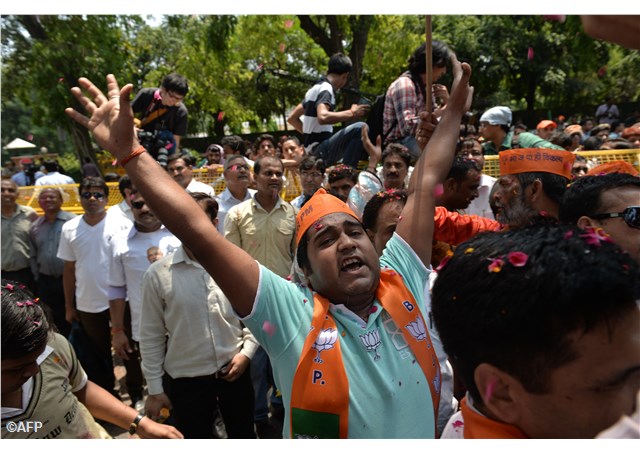 (Vatican Radio) The watchdog group International Christian Concern (ICC) said in a press release that nationalist groups have been directing hate speech toward Christians and leading attacks on pastors and churches in the northern state of Uttar Pradesh. Believers are reportedly worried that radical Hindu nationalism and persecution of minorities will escalate.

John Dayal, a member of the Indian government's National Integration Council, said: "There has been a sharp rise in hate campaigns against Christians by political organizations. This threat of purging Christians from villages extends from Chhattisgarh and Madhya Pradesh to now Uttar Pradesh, and to the borders of the national capital of New Delhi."

There have been reports of churches being turned into Hindu temples, and entire mobs attacking Christian houses. ICC shared details about one incident in July where a church in Sahakarinagar village was rampaged through by a group of 25 Hindu radicals, led by Hemanth Singh, a leader in the local Bajrangdal group.

Rev. RC Paul, who was leading a Bible study at the church at the time, was beaten along with several other members. "We were shaken and are very scared of the situation in the area. We are concerned of our safety, even going alone outside looks very dangerous at the moment," Paul said.

In fact, there have been reports of sporadic violence against Christians are also coming from other South Indian States like Andhra Pradesh, Karnataka and Tamil Nadu where several anti social elements under the banner of Hindu Nationalist organisations have been going on the rampage attacking Christians in their Churches and homes causing severe injuries and damage to Christian Property, not to speak of desecration of the sacred objects that they could lay their hands on.

Following May's election of the nationalist Bharatiya Janata Party, several Indian church leaders had said that they were not concerned that extremist groups would rise up against minorities. "Minorities, such as Christians and Muslims, are an integral part of the nation and of the social fabric of Indian society. Minorities are protected by the Constitution, I believe that the new government cannot and will not want to go against the Constitution. As Christians we are confident," His Exc. Mgr. Stanley Roman, bishop of Quilon, in the state of Kerala, had said at the time.

But no one can deny that India's Hindutva (Hindu nationalist) forces wanted the Barantya Janata Party (BJP) to win power at state and federal levels with absolute majorities so they can rule outright and not have their Hindutva program hamstrung by coalition partners. Uniting Hindus to dragnet the Hindu vote was vastly important to Hindutva as India, which is almost 80 percent Hindu, has numerous political parties.

Pursuing the Hindu vote the Hindutva forces have unleashed a vicious propaganda of Indian harmony, culture, identity, security, sovereignty and territorial integrity being seriously under threat from indigenous Christian missionaries, whom they describe variously as terrorists, separatists and CIA operatives. According to the Hindutva propaganda, the only way to save India is to unite behind Hindutva. 'Hindu Jago, Christi Bhagao!' – ('Arise Hindus, throw out the Christians!') - is their slogan.

What is alarming is that Hindu nationalists are now committing their violent attacks in front of television cameras, public meetings and even in the parliament. There have also been TV images which portray the perpetrators of violence as Hindutva cult heroes! The obvious silence and the presumably tacit approval of the Federal government to these serious developments have only fuelled further violence and has encouraged and bolstered the Hindutva hoodlums to terrorise the hapless Christians, who are more often than not, from the lower economic strata.

Msgr. Albert D'Souza, archbishop of Agra, in the state of Uttar Pradesh, and general secretary of the Indian Bishops' Conference, added that sometimes "small groups of fanatics can give us concern," but argued that the Church "will continue in its mission to pray for the new government and contribute to the common good of the nation, supporting democracy, respect for pluralism, the rights of all and a secular concept in the political agenda."

New Delhi Archbishop Anil J. Couto has now also raised concern, however, at the rising attacks on Christians and churches in India in recent months. "It is very disturbing, and we request local authorities to take adequate measures to book the miscreants threatening to weaken the social fabric of this great nation," Couto said.

"The Sangh Parivar plan [is] to carry out shuddhikaran — attempts to re-convert Christians to Hinduism," the Archbishop continued."This move by fundamentalist groups is a grave assault on the fundamental rights of individuals and people and groups."

Other persecution watchdog ministries, like Open Doors, have also noted a rise in Hindu extremism targeting Christians. The group ranks India as number 28 on its list of countries where Christians face the most persecution.

In May of this year, a village council in India passed an ordinance attempting to ban all Christian religious activity in a festival area. That came after some Christians in the village refused to pay a festival tax to a local Hindu temple. As a result of the village council's efforts, Hindu radicals in other parts of India have attempted to get similar ordinances in their area. In some cases they were successful. The council decrees were eventually overturned when they reached the district administration, but Stark says that isn't helping ease concerns.

In late July this year the Chief of the Rashtriya Swayam Sevak Sangh (RSS), a prominent Hindu Nationalist Organisation, courted controversy saying the world recognised India as a Hindu rashtra (nation). “So Hindutva is India’s identity. It’s the identity of everybody staying in this country. Except the Jews and the Parsis, everybody’s ancestors in India were Hindus. We are all influenced by the Hindu culture.”

Stating that “ours is a Hindu rashtra”, Mr. Bhagwat said the sole aim of the RSS was “to mobilise the Hindu society on the basis of Hindutva.” “Mobilising those who have forgotten that they are Hindus is the next task in line!” The RSS, regarded as the ideological head of the BJP had backed Narendra Modi for the general elections.