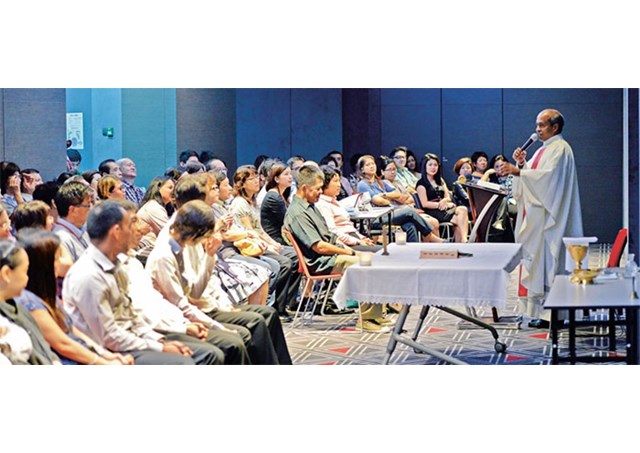 Catholics working in the Changi Business Park can now attend weekday lunchtime Masses just like their office counterparts who work in different areas of the city-state. The initiative is organized by the Catholic Prayer Society (CPS)

The daily Mass aims to promote reflection and prayer in the workplace. Moreover in recent months, the Archbishop of Singapore Msgr. William Goh Seng Chye had invited employees of parishes, schools and other Catholic institutions of the city-state to "pray at work" as "a sign of Christian witness".

In his homily, Fr Terence Pereira, CPS spiritual director, noted that in today's world, things are seldom fair. Some are paid more, while others less. He invited Catholics as believers, to simply do the work they are called to do, because what matters to God in the end when we meet Him is what we, and not what others, have done, he said

The lunchtime Mass was welcomed by those who attended.  It is "a good break from our busy work schedules and it allows us to praise God", said one participant. Another said he enjoys the fellowship which comes from a "smaller congregation and the warmth of the smiles from total strangers".

The idea to have lunchtime Masses in Changi was first mooted by some members of Couples for Christ who work in offices at the Changi Business Park.  Some Masses were then held from May to July to gauge the availability of venues and the response of working Catholics in the Changi area. The response was good, with attendance averaging 100 for each Mass. The service team then decided to continue holding the lunchtime Masses

The local church is going through a phase of growth and dynamism illustrated by the opening of a theological seminary, a real "milestone" for the local community. (AsiaNews)