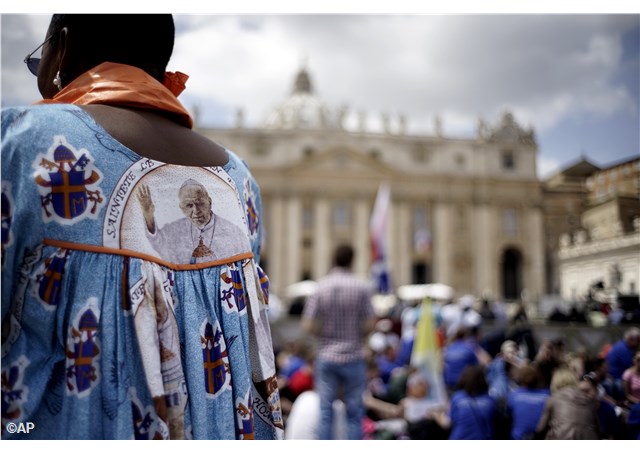 (Vatican Radio)  There is an urgent need to promote a dialogue of life with Muslims to discourage violence against Christians on the African continent, said Pope Francis Saturday in his address to the Bishops of Cameroon at the conclusion of their Ad Limina pilgrimage to the Holy See.

Cameroon lies in west central Africa and is home to an estimated  4.25 million Catholics, or  26% of the population, spread throughout 24 Dioceses. It shares a border with Nigeria to the West and Chad and the Central African Republic to the east – a region that is experiencing increasing insecurity because of the Boko Haram Islamist threat.

Just this week, Cameroon's army said that militants crossed into Cameroonian territory but pushed back after a three-hour battle. The incursion followed Boko Haram’s capture of the border town Banki which prompted the flight of tens of thousands of residents.

Pope Francis met with the bishops in the Clementine Hall where he delivered a prepared text, in which he touched on the theme of inter-religious dialogue.  He noted the significant presence of Muslims in some dioceses and said there is an urgent need to develop a dialogue of life with Muslims in a spirit of mutual trust  to maintain a climate of peaceful coexistence, and discourage the development of violence of which Christians are the victims in some parts of the continent.

In his speech the Pope addressed other areas, such as relations with the State and the contribution of the Church to society in Cameroon, chiefly in the fields of healthcare, education and caring for the poor and destitute.

He also addressed the issue of lay formation – particularly in these times where relativism and secularization are beginning to take root in Africa – and of evangelization.

Pope Francis said that the most effective form of evangelization is the credible witness to Gospel values of those who have received and profess the Gospel. Christians, he said, are called to show those who have yet to encounter Christ how the power of His love can transform and illuminate our lives.

To this ends, the Pope also asked church leaders to remain vigilant against the mismanagement of Church resources by clergy which he said would be “particularly shocking in a region where many people lack basic necessities”.

He also urged particular attention for the pastoral care of families  “especially today as they experience grave hardships – be they poverty, displacement of peoples, lack of security, the temptation to return to ancestral practices incompatible with the Christian faith, or even new lifestyles proposed by a secularized world”.

Pope Francis also encouraged the bishops to renew their spiritual bonds of communion with the Holy See, because it is only by being united in love that Christians can give an authentic and effective Gospel witness.  And he said that “unity and diversity are realities that uphold the human and spiritual richness” of the Church in Cameroon.

Finally, Pope Francis expressed his thanks to all priests and religious for their apostolic zeal, often in difficult conditions and insecurity.