Pope: recognize your sins and be transformed by Christ 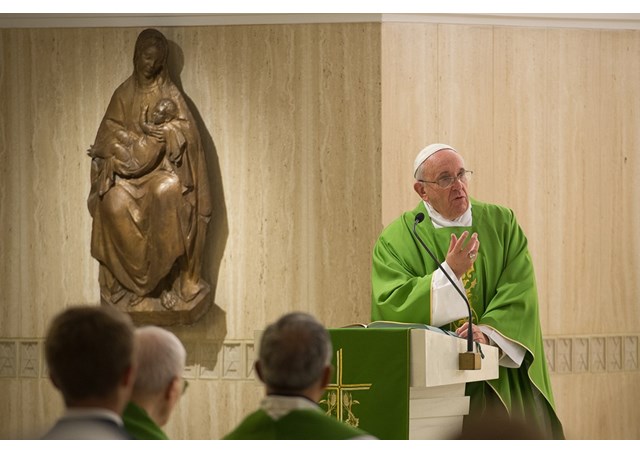 (Vatican Radio) Pope Francis on Thursday reflected on the transforming grace of God’s Word and invited Christians to recognize their sins and let themselves be transformed by their encounter with Christ.

The Pope was addressing the faithful gathered for morning Mass at Casa Santa Marta.

During his homily, Pope Francis reflected on the first letter of St. Paul to the Corinthians which reads: “If anyone among you considers himself wise in this age, let him become a fool, so as to become wise. For the wisdom of this world is foolishness in the eyes of God”.

Paul – he said – is telling us that it is the power of God’s Word that brings about a true change of heart, that has the strength  to change the world, giving us hope, giving us life.

He pointed out that this power is not to be found in human knowledge or in man’s intelligence. “Become fools” – Francis exhorted – don’t search for security in your knowledge or in the knowledge of the world”.

And the Pope said that although Paul had studied with the most knowledgeable teachers of his time, he never boasted of his knowledge. In a “scandalous” way – Francis said – he boasted of his sins and of his encounter with Christ and the crucifix, because that encounter between his sins and the blood of Christ is the only salvific encounter there is. And when we forget that encounter – the Pope said – we lose the power of Christ’s strength and we speak of the things of God with a human language, And  this – he said – is useless.

Pope Francis also recalled the Gospel story of Peter and the miraculous catch of fish during which Peter said to Jesus: “Go away from me Lord for I am a sinful man”. In this moment of meeting between his sins and Christ, the Pope said Peter finds salvation.

So, the Pope said: “the privileged place for an encounter with Christ are our sins. If a Christian is incapable of seeing his sins and his salvation in the blood of Christ, he has only gone half-way. He is a tepid Christian.

And the Pope pointed to those decadent Churches, decadent parishes, decadent institutions where most certainly Christians have never really met Christ or else they have forgotten that encounter.

Pope Francis concluded his homily inviting the faithful to ask themselves whether they are capable of telling the Lord they are sinners; whether they really believe  the Lord has given them a new life; whether they trust in Christ. Because – he said – a Christian can be boastful of two things: of his sins and of Christ on the cross.