Pope Francis shows solidarity with workers of Terni: Do not let "logic of profit" prevail 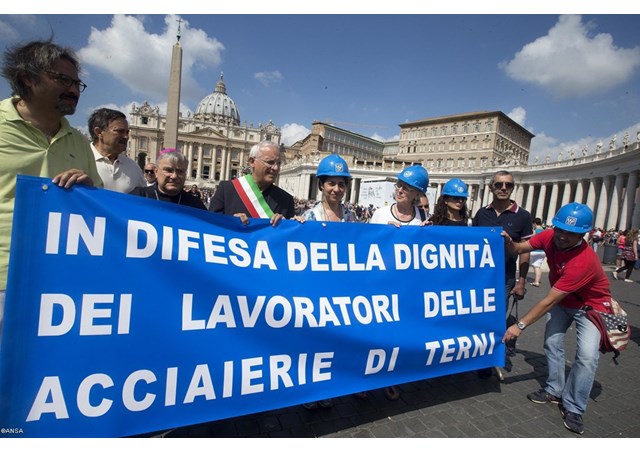 (Vatican Radio) Pope Francis on Wednesday once again called for a logic of “solidarity and justice” to prevail over a “logic of profit”.  He was voicing his concern for the workers at the ThyssenKrupp steel plant in the central Italian city of Terni. During the summer, the German company announced it was laying off 550 workers at the plant, about 20% of the workforce. The announcement has led to strikes, and the objections of Italy’s Economic Minister.

Recently, the Bishop of Terni-Narni-Amelia, Giuseppe Piemontese, called on ThyssenKrupp to remember the spirit of the “Mitbestimmung” [Co-determination], the German business model in which workers have a say in the running of the company, including seats on the board.

"It is true that in Italy, labor relations are mainly based on other models, but with a great German company, one would expected  that at least the spirit of Mitbestimmung would be encultured and promoted,” Bishop Piemontese wrote on August 30th.  He said the business plan presented by the company failed to meet up to those standards, which express the idea of “participation, sociality, fraternity, family, and teamwork in a market economy.”

At the end of Wednesday’s General Audience, Pope Francis said he wanted to add his voice to the words of the Bishop of Terni-Narni-Amelia.

“I express my profound concern over the grave situation being experience by many of the families in Terni due to the proposals of ThyssenKrupp,” Pope Francis said.

“Once again, I make a heartfelt appeal, that a logic of profit does not prevail, but one of solidarity and justice,” he continued. “At the center of every question, even those dealing with work, we should put the human person and his dignity.”

Pope Francis then strayed from his prepared text.

“With work, it’s not a game!” Pope Francis said.  “And who - for the sake of money, or business, or to earn even more - takes away work, know he takes away the dignity of the person.”