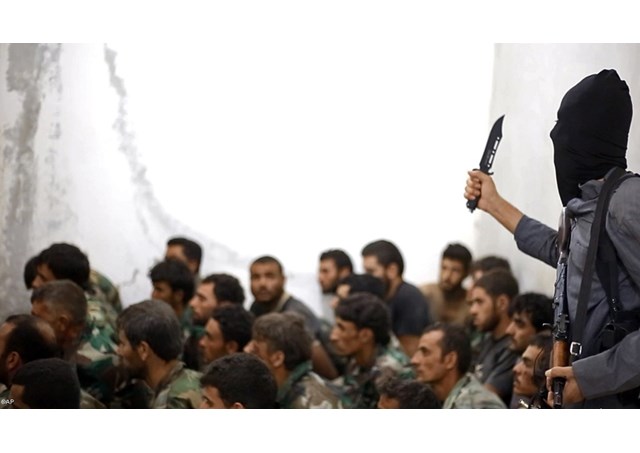 (Vatican Radio)  The atrocities committed by Islamic State (in Arabic: “Daesh”) militants in Iraq should be a wakeup call to the international community to take action.  That’s according to Lebanese Patriarchal Vicar for the Maronite Church, Archbishop Paul Sayah who warns that if IS and other extremist Islamic groups are not stopped, they will threaten the security of other states within and without the Middle East.   Tens of thousands of Christians, Yazidis and other minorities have fled to Northern Iraq to escape the death threats and brutality of the militants.

“I think everybody should wake up, otherwise, I think this fire will not limit itself to the region.”

“The way things are going in this part of the world is telling extremist Muslims that they can have their way and that moderation is not (accepted).  We want the international community to stop arming those people, to stop buying the oil they’re selling, to stop training their militants.  We want them - starting with Europe - not to allow them to recruit people.  It’s incredible that those people should be recruiting British and French and Americans and Europeans into their ranks.”

In a recent communique, Patriarchs of Eastern rite churches called upon “the Arab League, the Organization of Islamic Conference, the U.N. Security Council and the International Criminal Court to take swift, effective and immediate salvaging action” to safeguard threatened minorities.

Archbishop Sayah applauds a resolution taken up this week by the United Nations Human Rights Council to investigate reports of human rights violations in Iraq. He adds it is also “very, very urgent” to set up safe havens for those who have fled their villages.  Many displaced Christians and Yazidis, he notes, are currently housed in schools which will soon be opening back up to students and winter is not far off.

The entire region stands to lose should it be drained of its Christian presence, says Sayah.  “This is what the Muslims have been telling us: the Christian presence is an important factor not only for Christians as such but also for the whole of society, for Islam itself.”

One Middle Eastern democracy that works

Despite its troubled sectarian past, says Archbishop Sayah, Lebanon can be held up as an example of a democratic society where Muslims, Christians and other faith communities get along and where they “build” the country together.

“Wherever there are people of different ethnic, racial backgrounds, (you will find) problems, but problems can be solved…and up to now, in Lebanon, we’ve been able to solve (our problems) with reasonable limitation of damage.”

Before the conflicts broke out in Iraq and Syria, he points out, those countries also enjoyed relatively harmonious relations between the different faiths.

Sayah offers that he often hears the argument that Muslim and European cultures do not mix:  “but if there’s any place where this opinion can be contradicted, it is in Lebanon.”