Pope meets leaders of other Churches and faiths in Korea 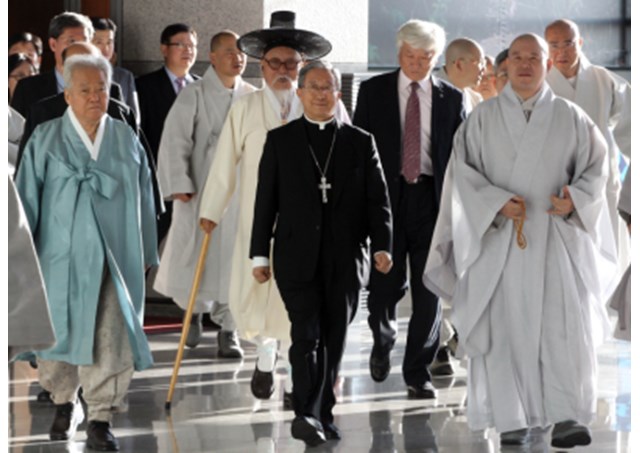 (Vatican Radio) Pope Francis met on Monday morning with leaders of the different Christian Churches in Korea, together with the heads of the other main religious communities. The encounter was held in Seoul’s Catholic cathedral, just ahead of a concluding Mass which marked the final event on a packed, five day, papal programme.

Our correspondent in Korea for this papal visit is Sean-Patrick Lovett  - he reports on this significant ecumenical and interfaith meeting.

Pope Francis had an opportunity to meet briefly this morning with Korea’s religious leaders, before going on to celebrate his last Mass in the country at Myeong-dong Cathedral.

Standing in front of a painting representing the recurring leitmotif of this visit, the Korean martyrs, the Pope greeted, one by one, among others: the Anglican Bishop of Seoul, the President of the Lutheran Church and the head of the Presbyterian churches in the country. Korea’s Buddhist leaders and representatives of other Christian communities were also present, along with the Orthodox Archbishop, who presented the Holy Father with a byzantine cross. The Pope appeared to be particularly pleased with this gift, promising to use it to impart the final blessing at the Mass.

And that’s exactly what he did.

The Pope’s improvised remarks in Spanish at the end of the encounter were translated for him by Fr John Che-chon Chong SJ – the newly-appointed Jesuit Provincial for Korea (and now familiar friendly face) who has been seen at the Holy Father’s side ever since he left Rome.

“We must continue walking together”, Pope Francis told the ecumenical gathering, “walking with God and going forward together. Pray for me”.

Religious observers in this country say that relations among the different confessions in Korea are cordial (at least on the surface) and rarely subject to many of the tensions experienced elsewhere in the world.

What they won’t say is if this is the result of praiseworthy religious tolerance – or growing religious indifference. A recent survey on the subject revealed that nearly half the population in Korea professes no religious belief whatsoever.

That’s why it is so easy to understand much of Pope Francis’ appeal to them: his is the new face in a faithless void.