Pope Francis in Korea: the stories you haven't read 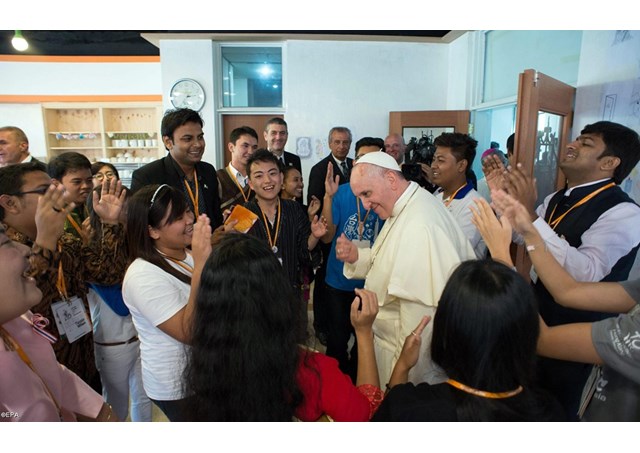 (Vatican Radio) What are the most important aspects of Pope Francis’ visit to Korea? While providing comprehensive coverage of the Korean voyage, Vatican Radio’s Seán Patrick Lovett is also able to share some of the stories you might not have read:

Here I am with no less than eight Korean newspapers piled up on the table in front of me. Six of them are in Korean, two in English. Fortunately, we have a translator who patiently and laboriously interprets the contents of the six that are a mystery to us, and helps us decipher what’s important and what’s not. The trouble is we don’t always agree.

For example, being Korean, he thinks we should be giving priority to press coverage of the Pope’s words and gestures regarding the Sewol tragedy. That’s perfectly understandable as it’s the biggest news story here right now and hopes are high that the Pope’s interest in the issue may somehow influence the Korean authorities to conduct a proper inquiry into the disaster. After all, as the banners and flags read, they only want the truth. Last night the nation’s number one television channel, KBS, featured several close-ups of the trademark yellow ribbon symbolizing Sewol which Pope Francis continues to wear very visibly on his cassock – and even his liturgical vestments during Mass.

For us Vatican Radio journalists, on the other hand, everything the Pope says is important and we try be as comprehensive as possible in our coverage of what he says, where, when and to whom. Sometimes we even explain why.

But by this time of day most of the above is already available on our website – so I thought I’d do you the favour of picking out some of the stories you may not have read (just promise you won’t tell our translator).

For example, there’s the 22 year-old Korean girl who overcame anorexia and asked the Pope if she could come to lunch with him when she’s in Rome. He didn’t hesitate for a moment before saying yes. There’s the blessing he gave to the couple who can’t have children and, of course, the man who asked to be baptised. Pope Francis will perform the baptism himself in the chapel of the Nunciature tomorrow morning. And what about the menu at the lunch with the young people? Grilled beef, fried fish, zucchini soup and, naturally, kimchi – Korea’s national dish. Finally, I can’t not mention the surprise train trip he took to Daejeon. He’d “never been on a high-speed train before”, he said. And anyway, he added, it gave him the chance “to be with everyone else”.  You might think he’d have had enough of “everyone else” by now –  but then he wouldn’t be Pope Francis, would he?