Korean Catholics inspired by the legacy of their martyrs 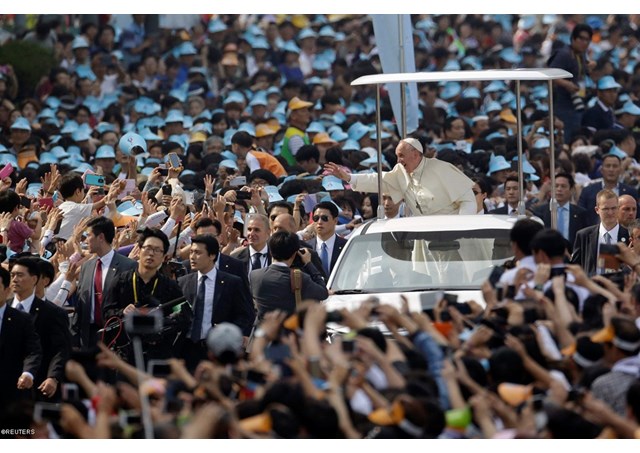 (Vatican Radio) After having visited and prayed at the Seo So-Mun Shrine of the martyrs in Seoul on Saturday, Pope Francis celebrated the Beatification Mass for 124 Korean martyrs before the symbolic Gwanghwamun Gate in the presence of some 800,000 faithful.

Sean Patrick Lovett who is in Seoul reporting on the Pope's apostolic visit gives us his impressions of this intense day and reports on the Pope's message during Mass, which he says, was received with reverence and prayerful silence.

As I watched the pope-mobile making its way slowly through the crowds of people thronging the boulevard of Guanghuamun Gate before Saturday morning’s Beatification Mass, I kept getting the feeling something was missing. But I couldn’t quite put my finger on it.

Apparently, it was just like any other papal drive-about: the Holy Father waving, smiling, dispensing blessings to left and right, kissing the occasional infant…The faithful, euphoric in their paper sun-hats, smartphones and tablets held high, trying desperately to immortalise the fleeting moment…

Then it hit me.

No one was flinging anything at him. No caps, no scarves, no football jerseys. It was all very composed and controlled. I’m not saying people weren’t excited to see the Pope. On the contrary. Many of them had been waiting for hours, others had travelled for miles to be there. They smiled and cried and waved and prayed and bowed (which is how you greet and show respect for someone here in Korea) – but no one pushed or shoved, or tried to get in front of the person closest to the barrier to get a better view. It was the epitome of self-control.

And that’s how it continued throughout the celebration. Even the sign of peace was the most elegant and devotional I’ve ever seen.

Over eight hundred thousand people listened in attentive silence as Pope Francis reflected on the role of the laity and the martyrs in the history of their local Church. He spoke about how their example “teaches us the importance of charity in the life of faith”. “They have much to say to us”, he said, “who live in societies where, alongside immense wealth, dire poverty is silently growing; where the cry of the poor is seldom heeded…The legacy of the martyrs”, said Pope Francis, “can inspire all men and women of good will to work in harmony for a more just, free and reconciled society, thus contributing to peace and the protection of authentically human values in this country and in our world”.

Keep in mind that the closest the vast majority of those present got to see the Pope was on giant screens lining the immense esplanade. Others stood or knelt with hands joined in prayer on nearby street corners, far away from the Mass site itself. Yet everyone seemed sincerely interested in listening to what Pope Francis had to say – and, more importantly putting his message into practice.