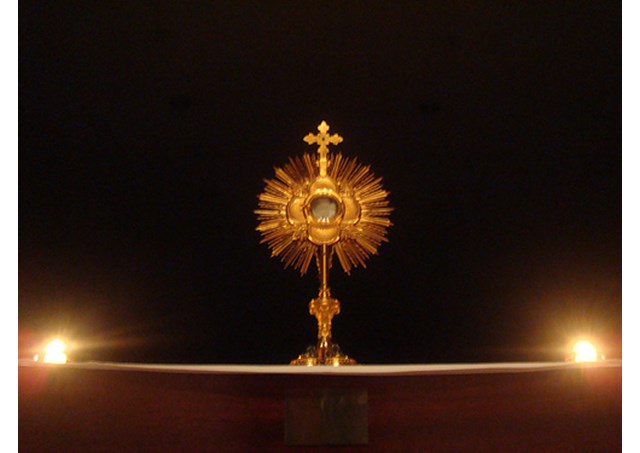 (Vatican Radio) The Bishops of the US state of Oklahoma are calling for prayer and fasting in response to a proposed “Black Mass” scheduled to be held in Oklahoma City’s civic center on September 21.

“Even though tickets are being sold for this event as if it were merely some sort of dark entertainment, this Satanic ritual is deadly serious,” says Archbishop Paul Coakley of Oklahoma City in a letter to the faithful. “It is a blasphemous and obscene inversion of the Catholic Mass.” In a video message to the people of his diocese, Oklahoma’s other Bishop, Tulsa’s Edmund Slattery, says, “a Black Mass blasphemes everything that we hold as sacred and redemptive. And because it offers false worship to Satan, it strengthens his kingdom and sharpens his powers against the Church.”

In his letter, Archbishop Coakley says he has expressed his concerns to city officials about the deeply offensive character of the Black Mass, and about “the misuse of a publicly supported facility for an event which has no other purpose than mocking the Catholic faith.” He says he is especially concerned about “the dark powers that this Satanic worship invites into our community and the spiritual danger that this poses to all who are involved in it, directly or indirectly.”

However, as city officials have thus far refused to cancel the event, the two Bishops are calling on the faithful to counter the proposed Black Mass with extraordinary acts of prayer and penance.

In the Archdiocese of Oklahoma City, Archbishop Coakley is asking for the Prayer to St Michael to be included at the end of every Mass, beginning on the Feast of the Transfiguration (August 6), and continuing through the Feast of St Michael the Archangel on September 29. The Archbishop has also called for all parishes in the Archdiocese to “conduct a Eucharistic Holy Hour with Benediction to honor Christ’s Real Presence in the Holy Eucharist, between the Solemnity of the Assumption of the Blessed Virgin Mary (August 15) and September 21, to avert this proposed sacrilege.”

Bishop Slattery is asking the faithful in the Diocese of Tulsa to keep the nine days prior to the Feast of the Assumption (August 6-14) as “a period of extraordinary prayer and penance,” requesting them to abstain from meat during that time, and if possible to fast. “This will be a hard sacrifice, I know,” he said. “But I also know that Jesus said certain demons could only be cast out by prayer and fasting.” He asked that Catholics would “consecrate [their] hunger during these nine days, by a daily recitation of one decade of the Rosary, and the familiar prayer of St. Michael.” Finally, Bishop Slattery asked priests of the diocese to say the Leonine prayer, written by Pope Leo XIII for the defense of the Church against the attack of the enemy and his apostate angels.”

Both Archbishop Coakley and Bishop Slattery have also called for Eucharistic Holy Hours on the day of the Black Mass, if the event is not cancelled. Archbishop Coakley has invited all Catholics, Christians, and people of good will to join him in prayer at 3 pm on September 21 for a Holy Hour, outdoor Eucharistic procession and Benediction in Oklahoma City; while Bishop Slattery has asked all parishes of his diocese to conduct a Eucharistic Holy Hour at the time the Black Mass is taking place.

In the conclusion to his video message, Bishop Slattery says: “My dear people, Jesus has already won the victory over sin and death by His Resurrection. Jesus has trampled the pride of the enemy and has broken his attack. We have no reason to fear the devil. He has already lost the battle. Let us pray then in confidence and be assured that God Who is gracious and merciful will hear us, and, by the intercession of our Lady, deliver us from the evil posed by the celebration of this black Mass.”