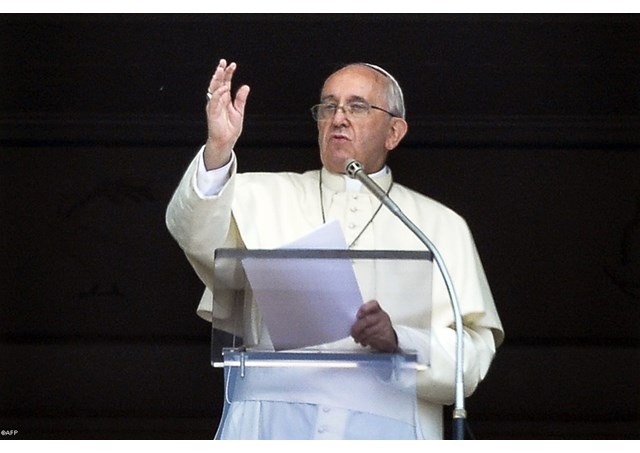 (Vatican Radio) Pope Francis prayed the Angelus with the faithful gathered beneath a dreary, drizzly early August sky in St. Peter’s Square this Sunday, the eighteenth Sunday in Ordinary Time, on which the account of the multiplication of the loaves and fishes from the Gospel according to St. Matthew (14:13-21) is proclaimed. It was on the Lord Jesus’ miraculous feeding of the five thousand that the Holy Father focused his remarks ahead of the traditional prayer of Marian devotion at midday.

Pope Francis chose three specific lessons from the episode: compassion; sharing; thanksgiving – a foreshadowing of the great Sacrament of Thanksgiving, the Eucharist. “Christ” said Pope Francis, “does not react with irritation to the crowd that followed him [to the place hard by the Sea of Galilee, to which he had repaired with the disciples], and would not – so to speak - ‘leave Him in peace’. Rather, He feels compassion, because He knows that they do not seek Him out of [mere] curiosity, but out of need.” Pope Francis went on to say that the many healings Christ performed were the sign of His compassion. “Jesus,” said the Holy Father, “teaches us to put the needs of the poor ahead of our own. Our needs, even if legitimate, will never be so urgent as those of the poor, who lack the necessities of life.”

Turning to the lesson of sharing, Pope Francis contrasted the reaction of the disciples when faced with the needy multitude, with that of Jesus. The disciples would have sent the people away hungry, while Christ tells them to feed the gathered crowd. “Two different reactions,” said Pope Francis, “which reflect two opposing logics: the disciples are thinking according to the world, for which everyone has to take care of himself; Jesus thinks according to the logic of God, which is that of sharing,” and so the people were fed, and fed abundantly. The Holy Father went on to say, “This is no magic trick, but a ‘sign’ – a sign that invites us to have faith in God, the provident Father, who will not force us to go without ‘our daily bread’, if we know how to share it as brothers and sisters.”

The third and final message, regarding the Eucharist, can be seen in Jesus’ recitation of the blessing before breaking the bread and distributing it to the crowd. “It is,” he said, “the same act that Jesus will make at the Last Supper, when He will establish the perpetual memorial of His redeeming sacrifice,” a memorial that is not mere earthly bread, but the bread of eternal life, Christ’s gift of His very self, as He offers Himself to the Father out of love for us.

Pope Francis concluded with an invocation of Our Lady, Mother of Divine Providence, that she might accompany us on our earthly pilgrimage and assist us as we strive to meet the needs of those we encounter along the way in a spirit of fraternity.