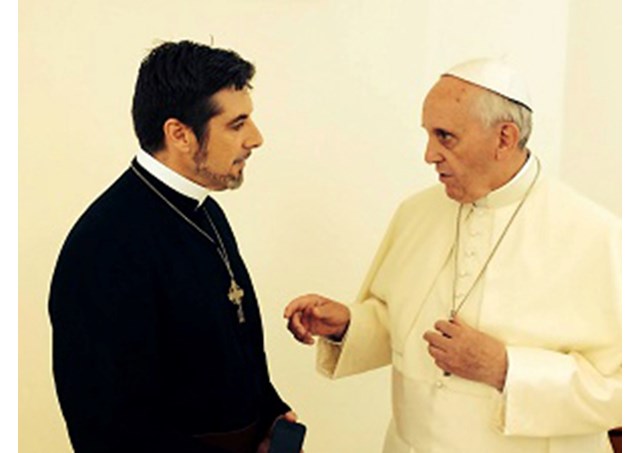 (Vatican Radio) The Vatican’s Council for Christian Unity has sent a message of condolences following the sudden death of an Evangelical leader with whom Pope Francis became friends during his time as archbishop of Buenos Aires. Bishop Tony Palmer, the international ecumenical officer of the Communion of Episcopal Evangelical Churches and founder of the online Ark Community, died on Sunday following a motorbike accident near his home in the south of England.

In the message to his widow, Council President Cardinal Kurt Koch says Bishop Palmer’s meetings with Pope Francis over recent months “have given great impetus to ecumenical relations between the Catholic Church and Evangelical Christians.” His strong faith and his passion for unity, the Cardinal says, “reached a global audience of Christians with the message that there is no time to be wasted in division, the time for unity is now.”

During one of his visits to the Vatican in February this year, Bishop Palmer recorded an iphone message that Pope Francis wished to send to a Pentecostal group meeting in the United States. In that off-the-cuff video message, the Pope speaks frankly of his longing for unity and reconciliation, saying that all Christians share the blame for the sins of division.

Mgr Juan Usma Gomez heads the Pontifical Council desk for relations with Pentecostals, Evangelicals and Charismatic groups. He talked to us about the significant impact that Bishop Palmer’s friendship with Pope Francis has had on the worldwide ecumenical movement, saying that they first met in Argentina when Tony Palmer was part of a delegation of Pentecostals and Evangelicals that was holding talks with the Catholic Church in Buenos Aires....."when Tony Palmer was ordained bishop in the Communion of Episcopal Evangelical Churches, they received greetings from the then archbishop Bergoglio...."

Mgr Usma Gomez says Pope Francis teaches us that "to work for Christian unity you need brotherhood....and you realise that all the friends he had in Argentina continue to be his friends.......he's trying to build up not only relations of friendship but also relations of churches trying to look for the promotion of Christian unity..."

He says that the iphone message recorded by Bishop Palmer for the Pentecostal community "opened a door because it reached a really significant number of people...it's an adventure that Pope Francis is asking us to establish.....he started it, he's way ahead of us and we're trying to follow this pattern!"