Pope Francis prays for peace in the Middle East 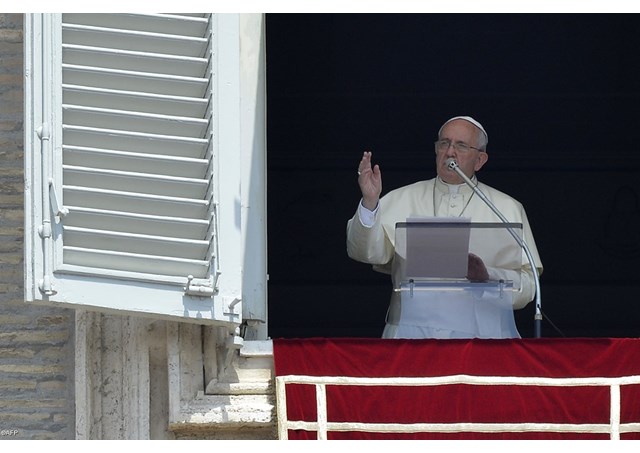 (Vatican Radio) Pope Francis on Sunday expressed his concern for the plight of Christian communities in the Iraqi town of Mosul and in other parts of the Middle East.

Speaking after the Angelus in St. Peter’s Square, the Pope turned his thoughts to those Christians who are now persecuted in the lands they have lived since the beginning of Christianity, offering - he said - a precious contribution to the good of society.

“Today our brothers are persecuted” – the Pope said – "they are banished from their homes and forced to flee without even being able to take their belongings!”

And, assured them of his closeness and constant prayer he said: “My dear brothers and sisters who are persecuted, I know how much you suffer; I know that you are deprived of all. I am with you in faith in He who conquered evil”.

The Pope then appealed to all – to those present in the Square and far beyond – to persevere in praying for peace in all situations of tension and conflict in the world, and he especially mentioned the Middle East and Ukraine.

“May the God of peace” – Francis said – “arouse in all an authentic desire for dialogue and reconciliation. Violence cannot be overcome with violence. Violence is overcome with peace!”

The Pope’s appeal followed his Sunday address to the crowds gathered in the Square for the recitation of the Angelus prayer.

Taking his cue from the Gospel reading of the day, the Pope reflected on the parable that tells of the man who sowed good seed in his field while his enemy sowed weeds. But when the man’s servants offer to pull up the weeds, the man stoped them saying “if you pull up the weeds you might uproot the wheat along with them”.

This parable – Pope Francis explained – speaks to us of the problem of evil in the world and it highlights God’s patience.

The devil – he said – plants evil where there is good, trying to divide people, families and nations. But God – he continued – knows how to wait. He looks into the ‘field’ of each person with patience and mercy: he sees the dirt and the evil much better than we do, but he also sees the seeds of good and patiently awaits their germination.

God – Pope Francis said – is a patient father who waits with an open heart to welcome us and to forgive us. But – he pointed out – His patience does not mean He is indifferent to evil. One must not confuse good and evil. And at the end, at the time of the harvest, Jesus will judge us all separating those who have sown good seed from those who have sown weeds. And – Francis said – we will be judged with the same meter with which we judged others; we will be shown the same mercy we showed towards others.

Let us ask Our Lady – Pope Francis concluded – to help us grow in patience and in mercy.