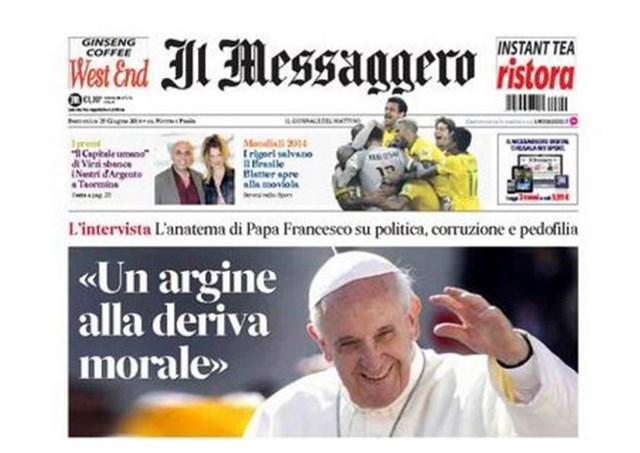 (Vatican Radio) The Rome daily “Il Messaggero” on Sunday published an interview with Pope Francis made ​​by journalist Franca Giansoldati. In his responses to questions on a wide range of issues, the Holy Father focused, among other things, on the challenges of change in the current “era” and “culture,” which has consequences for political, financial, and social life. The Church, along with various civil and social institutions,  must respond to these challenges by protecting the common good and defending human life and dignity.

“Always protecting the common good, which includes “defending human life and dignity” is “the vocation of every politician,” the Holy Father said. Today, the problem of politics – which Pope Francis called a “worldwide problem” – is that it “has been devalued, ruined by corruption, by the phenomenon of bribery.” This “moral decay, not only in politics but also in the financial or social” sector, is driven by “change of epoch” that we are experiencing today, which is also “a change of culture.” In this context, our anxieties about poverty are not concerned solely with material poverty.

“I can help someone who is hungry, so that they are no longer hungry,” the Pope said. “But if someone has lost his job,” he is involved in another kind poverty. He no longer has his dignity.” Helping families in need, then, requires a “joint effort.” Pope Francis recognized that this is an “uphill” journey, but insisted it must be undertaken, working above all for the good of children. “Starting a family is an effort,” he said, because of economic difficulties that “social policy does not help.” Commenting on the very low birth rates in Europe – which makes it seem “as if she were tired of being a mother, preferring to be grandmother,” the Holy Father noted that the causes of this phenomenon lie not only in a “cultural drift marked by selfishness and hedonism,” but also in the current economic crisis.

Pope Francis was asked how he would respond to being called “a communist.” “I would only say that the Communists have stolen the banner… The banner of the poor is Christian; poverty is at the heart of the Gospel.” The cause of the poor is pre-eminently a Christian cause.  The Gospel cannot be understood “without understanding real poverty.” At the same time, the Pope said there is also a “very beautiful ‘poverty of the spirit’,” being poor in the sight of God because God fills you up. The Gospel, in fact, is addressed indiscriminately to the poor and to the rich and "does not at all condemn those who are rich,” but rather condemns their riches when they become the objects of idolatry.

To the question “Where is the Church of Bergoglio headed?” Pope Francis replied, "Thanks be to God, I don’t have any church – I follow Christ. I didn’t found anything.” He went on to say “my decisions are the fruit of the meetings before the conclave. I have done nothing on my own.”

The Church in Asia “is a promise,” he said, turning to his upcoming trips to Korea, in August, and to Sri Lanka and the Philippines, in January. He also spoke about China, saying it represents “a great, a very great pastoral challenge.”

During the interview, Pope Francis also took up a number of other themes already addressed during his pontificate, such as the place of women in the Church. Without an understanding of femininity, the Pope said, one “cannot understand the Church herself.” Women “are the most beautiful thing God has made. The Church is a woman.” He said that in doing theology, one must take account of this “femininity,” and that the Church must continue to work on and develop a “theology of the woman.”

Pope Francis spoke also about the corruption and the economic and sexual exploitation of children. The Pope speaks of incidents of child prostitution that were reported to him when he was archbishop of Buenos Aires, involving even elderly men. “For me,” the Pope said, “people who do this to young girls are paedophiles.”

Finally, on the feast of Saints Peter and Paul, the patron saints of Rome, Pope Francis spoke about the everyday life and traditions of the City of which the Pope is the bishop. This role, the Holy Father said, is “the first service of Francis.” Pope Francis said Rome shares many of the problems of other cities “such as Buenos Aires.” He said a conference dedicated to the theme of “the pastoral care of the great cities” will take place in Barcelona in November. Pope Francis expressed his hope that the citizens of Rome, the inhabitants of a city “that should be a beacon in the world,” would not lose “joy, hope, confidence, despite difficulties.”