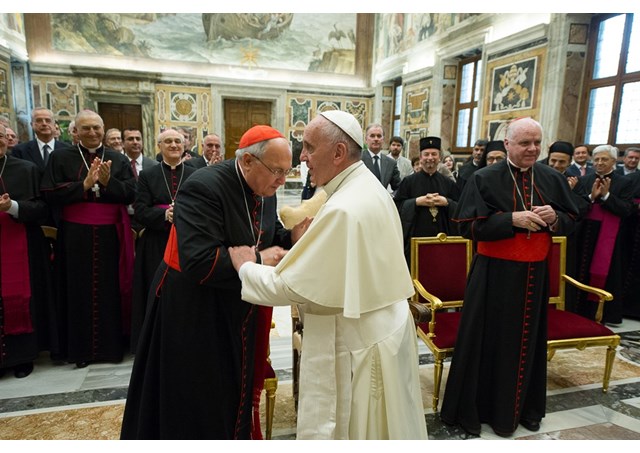 (Vatican Radio) Pope Francis received the participants in the Plenary Assembly of the Reunion of Aid Agencies for the Oriental Churches – ROACO – on Thursday. In remarks prepared for the occasion and delivered during the audience, Pope Francis confirmed his closeness to all the Churches of the East. He also recalled his recent visit to the Holy Land, saying, “My pilgrimage was a great source of consolation, but also of encouragement and a renewed sense of responsibility for the advancement of full unity among Christians and of dialogue between religions.”

The Holy Father especially remembered the Christian communities in Iraq and Syria. “The Catholic Church is close to them,” he said. The Pope went on to say, “The Church is likewise close to our brothers and sisters in the Holy Land and the Middle East, but also to the beloved people of Ukraine in the critical situation in which they find themselves, and to the people of Romania.”

Pope Francis said that the work of the ROACO gives concrete expression to this closeness and concern, and urged the participants to continue their efforts. “Your works of relief and assistance,” said Pope Francis, “respond to basic needs, particularly of those who are powerless and most vulnerable, as well as the many young people tempted to leave their homeland.” He also recalled the Eastern Rite Christians spread in communities throughout the world. “[S]ince communities of Eastern Christians are present worldwide,” he said, “you are working everywhere to bring relief to the displaced and to refugees, restoring their dignity and their security in full respect for their identity and religious freedom.”

The Holy Father concluded with a request that Eastern Church leaders give special priority to the family, especially in light of the upcoming Synod Assembly dedicated to the theme. “May the Mother of God accompany all families with her prayers,” he prayed, “so that through them the Church, filled with the joy and strength of the Gospel, may always be a fruitful mother, anxious to strengthen the unity of the whole family of God.”