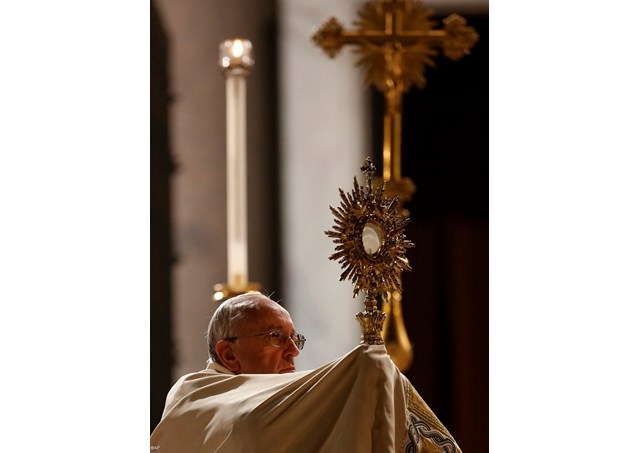 (Vatican Radio) Pope Francis celebrated Mass at Rome’s cathedral Basilica of St John Lateran on Thursday evening, to mark the Solemnity of the Most Precious Body and Blood of Our Lord, Jesus Christ, often known by the abbreviations of its Latin name, Corpus Domini or Corpus Christi. Mass was followed by the traditional torchlight Eucharistic procession, in which parish groups, sodalities and charitable and fraternal organisations of all kinds participate along with ordinary citizens, from the Lateran basilica to the Basilica of St Mary Major. There, the Holy Father led the faithful in a brief moment of Eucharistic adoration and gave Eucharistic benediction.

In his homily, Pope Francis reflected on memory – understood as remembrance and recollection, but also and even primarily as the orienting presence of the past and the presence of the future in our personal and common consciousness. Working out of the reading proclaimed from the Book of Deuteronomy, in which Moses recalls the Lord’s saving action to the attention of His forgetful people, Pope Francis said, “Each of us can ask ourselves: what is my memory? That of the Lord, who saves me, or that of the garlic and onions of slavery? With what memory do I satiate my soul? The Father tells us: ‘I have fed you with manna which you did not know.’ Let us recover memory,” said Pope Francis. “This is the task,” he continued, “to recover memory; and learn to recognize the false bread that deceives and corrupts, because it is the result of selfishness, self and sin.”