Pope Francis to Italian Magistrates: Be prudent, impartial and models of morality: 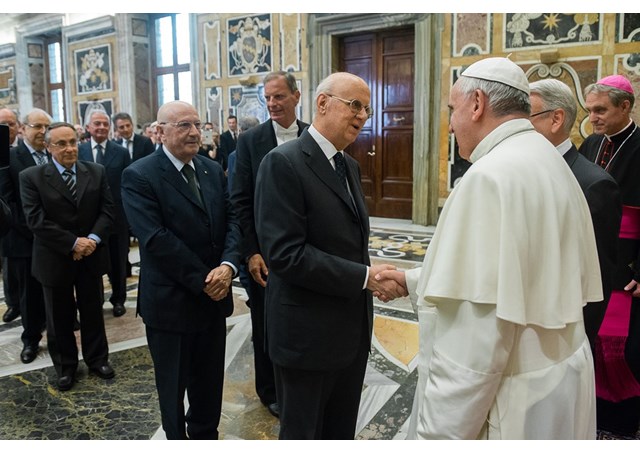 (Vatican Radio)  Pope Francis met members of Italy’s Superior Council of Magistrates on Tuesday  and urged them to be examples of morality whilst stressing the importance of prudence and impartiality.

In his address, he noted legal norms in every country are intended  to protect the freedom and the independence of the judiciary so it has the necessary guarantees to carry out its important and delicate role. Pope Francis said this places the magistrates in a position of particular significance where they need to maintain an incontrovertible impartiality at all times, using objectivity and prudence whilst basing their judgements exclusively on the correct legal norms and above all so they can respond to the voice of their own unswerving conscience.

Being a magistrate or judge requires intellectual, psychological and moral qualities but one particularly pertinent quality or virtue, said the Pope, is that of prudence.  This virtue doesn’t mean standing still but it helps a person to ponder and consider the legal reasons and facts on which each judgement should be based. He said a magistrate will be more prudent if he or she has a strong internal equilibrium  that is capable of overcoming instincts coming from their own character, own personal viewpoints or their own ideological convictions.

Italian society, he continued, expects a lot from its magistrates, particularly nowadays, given the shrinking of its moral heritage  and its changing democratic structures.  Pope Francis  concluding by urging the magistrates to strive to be an example of moral integrity for the whole society saying there are many inspirational role models.  In this regard, he mentioned the magistrate Vittorio Bachelet who was killed (by the Red Brigades) during Italy’s so-called Years of Lead and Rosario Livatino who was killed by the mafia.