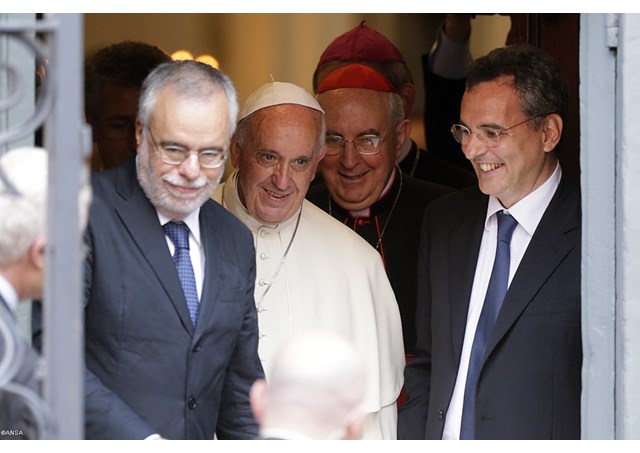 (Vatican Radio) On Trinity Sunday evening, Pope Francis visited the community of Sant’ Egidio in the Roman neighbourhood of Trastevere. Sant’Egidio was founded in Trastevere in 1968, in the wake of the II Vatican Council, and has grown into a movement of lay people that counts more than 60 thousand members, dedicated to evangelisation and charity, in more than 73 countries throughout the world.

On his arrival he was greeted by packed crowds of the faithful, including a group of refugees from Lampedusa.

Inside the church of Santa Maria in Trastevere, the Holy Father heard testimonials from a number of people representing, among others, the elderly, the unemployed, and the disabled.

Pope Francis spoke to the community, focusing on solidarity: solidarity in prayer; solidarity in action to aid the weakest and most vulnerable in society; and especially, solidarity across generations. Departing from his prepared remarks, the Holy Father said, “A people that does care for its elder members, one that does not take care of its young people, is a people without a future, a people without hope – for young people - children, young people - and seniors carry [the people] forward in history.” Pope Francis went on to say, “Children and young people [do so] with the vim and vigor natural to youth, to be sure [It. I bambini, i giovani con la loro forza biologica, è giusto]. The elders [do so] by offering memory. When a society loses its memory, though, it is finished.”

Pope Francis went on to tie the crisis among the young and the elderly in society to the “throw-away culture” that drives and dominates globally. “In order to maintain such a [system], in which, at the center of the world economy, there are not man and woman, but the idol of money, it is necessary to discard things. Children are discarded.”

“Just think,” he continued, “of the birth rate in Europe: in Italy, Spain, France – and the elderly, [too], are thrown away, with attitudes behind which there hides a form of euthanasia. [The elderly] are no longer useful – and that whish is not useful is to be tossed aside,” he said.

“Europe is tired,” said Pope Francis. “We have to help Europe rejuvenate, to find its roots. It is true: Europe has disowned its roots – and we must help Europe to rediscover those roots.”