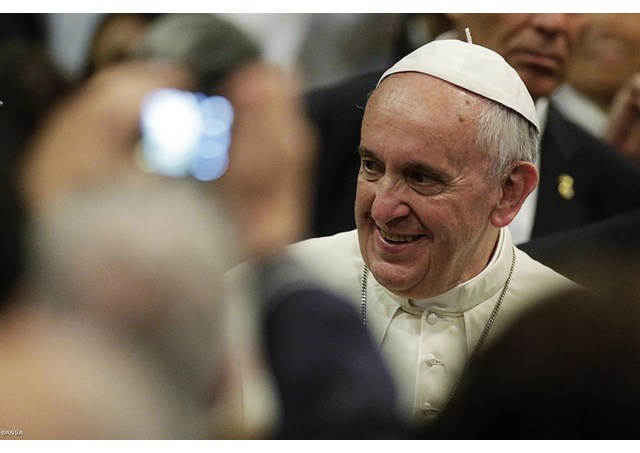 (Vatican Radio)  Pope Francis on Monday expressed appreciation for a Conference on ethical investment pointing out that the world of finance must serve the interests of peoples and the common good of humanity.

In a discourse to participants of the two-day Symposium “Investing for the Poor” that is taking place in the Vatican, the Pope said that speculation on food prices is a scandal and he called on Governments throughout the world to develop an international framework that promotes a market of high impact investments, and thus combat an economy which excludes and discards.

The symposium, jointly sponsored by the Pontifical Council of Justice and Peace headed by Cardinal Peter Turkson, Catholic Relief Services and the Mendoza College of Business from the University of Notre Dame, is examining “impact” investing and how it can serve the poor.

Please find below the full text of the Pope’s discourse:

I offer you a warm welcome and I express my gratitude and appreciation for your Conference, which offers an important contribution to the search for timely and realistic strategies to ensure greater social equality.  I thank Cardinal Turkson for his kind introduction.

A sense of solidarity with the poor and the marginalized has led you to reflect on impact investing as one emerging form of responsible investment.  Representatives of the Roman Curia have joined you in these days of study aimed at assessing innovative forms of investment which can benefit local communities and the environment, as well as providing a reasonable return.

Impact investors are those who are conscious of the existence of serious unjust situations, instances of profound social inequality and unacceptable conditions of poverty affecting communities and entire peoples.  These investors turn to financial institutes which will use their resources to promote the economic and social development of these groups through investment funds aimed at satisfying basic needs associated with agriculture, access to water, adequate housing and reasonable prices, as well as with primary health care and educational services.

Investments of this sort are meant to have positive social repercussions on local communities, such as the creation of jobs, access to energy, training and increased agricultural productivity.  The financial return for investors tends to be more moderate than in other types of investment.

It is important that ethics once again play its due part in the world of finance and that markets serve the interests of peoples and the common good of humanity.  It is increasingly intolerable that financial markets are shaping the destiny of peoples rather than serving their needs, or that the few derive immense wealth from financial speculation while the many are deeply burdened by the consequences.

Advances in technology have increased the speed of financial transactions, but in the long run this is significant only to the extent that it better serves the common good.  In this regard, speculation on food prices is a scandal which seriously compromises access to food on the part of the poorest members of our human family.  It is urgent that governments throughout the world commit themselves to developing an international framework capable of promoting a market of high impact investments, and thus to combating an economy which excludes and discards.

On this day when the Church celebrates the memorial of Saints Quiricus and Giulitta, a son and mother who, in the persecution under Diocletian, left all their possessions behind into order to accept martyrdom for the name of Christ, I join you in asking the Lord to help us never to forget the transience of earthly goods and to renew our commitment to serve the common good with love and with preference for the most poor and vulnerable of our brothers and sisters.  With great affection I bless you and your work.  Thank you.