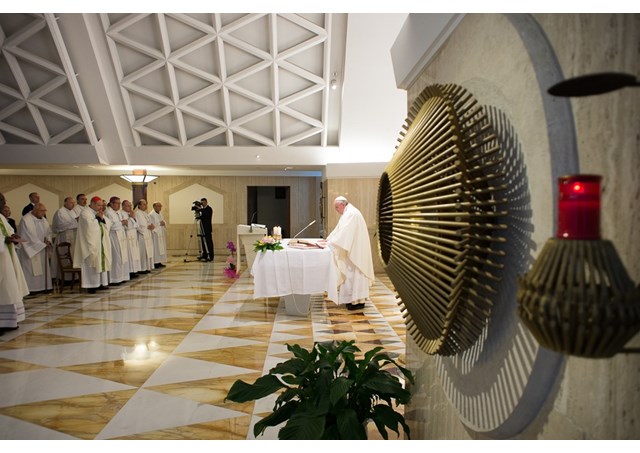 (Vatican Radio) The poor are the ones who end up paying for the damage wrought by the corruption of the powerful, whose avidity leaves the poor without the things of which they have need and to which they have a right. This was the theme of the Holy Father’s remarks following the readings of the day at Mass in the chapel of the Casa Santa Marta residence. “The only wat to [defeat] the sin of corruption,” he concluded, is “service” to others that purifies the heart.

A “very sad” story  that, even if very old, is still a reflection of one of the most “handy” sins: corruption. Pope Francis reflections turned on the story, told in the readings of the day, of Naboth, the owner of a vineyard that had been in his family for generations. When King Ahab – meaning, explained Pope Francis, to “to widen his garden a bit,” – asks him to sell it, Naboth refuses because he does not intend to dispose of' the “inheritance of his fathers.” The King took the rejection very badly, so his wife Jezebel weaves a trap with the help of false witnesses, and Naboth is dragged into court, convicted and stoned to death. In the end, Jezebel delivers the desired vineyard to her husband, who takes the land calmly, “as though nothing had happened.” Pope Francis said, “This story is continuously repeating itself,” among the ranks of those, who wield power, whether material, political or spiritual:

“In the newspapers we read many times: ‘Ah, that politician who got rich by magic has been brought into court. That business owner, who got rich by magic – that is, by exploiting his workers – has been dragged into court. We hear too much talk of a prelate who has become rich too, and left his pastoral duty to care for his power. So, the corrupt politicians, the corrupt businessmen and the corrupt clergy, are to be found everywhere – and we have to tell the truth: corruption is precisely the sin that the person with authority – whether political, economic or ecclesiastical – over others has most readily to hand. We are all tempted to corruption. It is a ‘handy’ sin, for, when one has authority, one feels powerful, one feels almost like God.”

Pope Francis went on to say that one becomes corrupt “along the way that looks out for number 1 [It- la strada della propria sicurezza],” with “well-being, money, then the power, vanity, pride – and from there, everything [becomes possible], even killing.” The Holy Father went on to ask, “who pays the price for corruption?” and answers that it is, in  fact, the poor who pay the price:

“If we talk of politically or economically corrupt people, who pays for [their corruption]? Pagano hospitals without medicine, the patients who did not receive care, the children without education. They are the modern Naboths, who pay the price for the corruption of the haughty. And who pays the price for the corruption of a prelate? The children pay, who cannot make the sign of the cross, who do not know the catechism, who are not cared-for. The sick who are not visited, the imprisoned, who receive no spiritual attention. The poor pay. Corruption is paid by the poor: the materially poor and the spiritually poor.”

Instead, says Pope Francis, “the only way to escape corruption, the only way to overcome the temptation to – the sin of – corruption, is service.” Because, he says, “corruption is pride, arrogance – and service humiliates you.” It is “humble charity to help others”:

"Today, we offer the Mass for them – many, many of them – who are paying the price for corruption, bearing the cost of the lives of the corrupt. These martyrs of political corruption, economic corruption, and ecclesiastical corruption. We pray for them. May the Lord bring us closer to them. Surely He was very close to Naboth, in the moment he was stoned to death, as He was to Stephen. May the Lord be close and give strength [to those bearing the burden of corruption], so that they might go forward with their witness.”