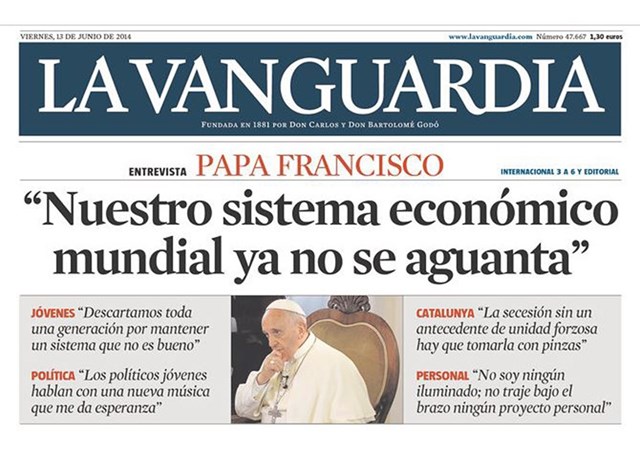 (Vatican Radio) Pope Francis strongly defended the record of Pius XII and said all divisions concern him when discussing secessionist movements in Europe during a wide-ranging interview with La Vanguardia, the leading newspaper in Barcelona.

During his interview with the Catalonian newspaper, Pope Francis said he was concerned about “everything which has been thrown at poor Pius XII”, noting the many Jews he had hidden in the convents of Rome and other Italian cities, as well as the summer residence in Castel Gadolfo.

“I do not mean to say that Pius XII did not make mistakes – I make many mistakes myself – but his role must be read in the context of the time,” Pope Francis said.

The Holy Father added that he gets an “existential rash” when he see people speak against the Pope and the Church during World War 2, but ignoring the role played by the Allied Powers.

“Did you know that they knew perfectly well the rail network used by the Nazis to take the Jews to the concentration camps? They had the photographs,” he said.  “But they did not bomb these rail lines. Why? It would be nice if we spoke a little bit about everything.”

When asked about the Catalonian situation in Spain, Pope Francis said “All division concerns me.”

The Holy Father distinguished between " independence for emancipation”  and “independence for secession,” giving the former Yugoslavia as an example of the former “where there are peoples and cultures so diverse that they are completely unconnected.”

As for the situations in Catalonia, northern Italy, and Scotland, Pope Francis said “they should be studied on a case-by-case basis.”

“There will be some cases that are just and some that are unjust, but the secession of a nation that hasn’t been previously forced together is an issue that must be taken up with tweezers,” he said.

Turning to economic affairs, Pope Francis told the newspaper it is “outrageous” that some countries have a youth unemployment rate of more than 50%, with tens of millions of young Europeans out of work.

"We discard a whole generation to maintain an economic system that no longer works, a system that to survive must make war, as the great empires have always done," he told the newspaper.

"But since we cannot wage World War III, we then make regional wars. And what does that mean? That we make and sell weapons,” he continued. “And with that the balance sheets of the idolatrous economies -- the big world economies that sacrifice man at the feet of the idol of money -- are obviously cleaned up."

Pope Francis also spoke about his life as Pope, and said serving as a pastor is most important dimension of his vocation.   He said he eschews a bulletproof Popemobile because it is a glass “sardine can” which serves as a wall between him and the people.

"It's true that anything could happen, but let's face it, at my age I don't have much to lose," he said.

Pope Francis said the retirement of Pope Benedict XVI was a “great gesture” which opened the door to the creation of the eventual institution of the Popes-emeritus.

"As we live longer, we get to an age at which we cannot carry on with things,” the Pope said. “I will do the same as he did: ask the Lord enlighten me when the moment comes and tell me what I have to do, and he will tell me for sure."

On a lighter note, Pope Francis said he promised the Brazilians to stay neutral during the World Cup, so refused to answer a question about who he was supporting during the tournament.

The newspaper concluded the interview by asking the Holy Father how he would like to be remembered by history.

“I have not thought about this,” Pope Francis said. “But I like it when you recall someone and say ‘he was a good guy, he did what he could, and he was not that bad.’ With that, I would be content.”