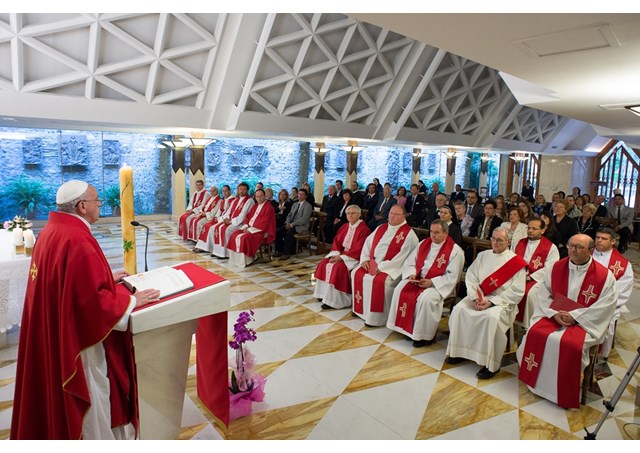 (Vatican Radio) Pope Francis celebrated Mass in the chapel of the Casa Santa Marta residence in the Vatican on Thursday. In remarks following the readings of the day, the Holy Father focused on the need to cultivate a real sense of belonging in and to the Church, and spoke of three temptations into which people who call themselves Christians often fall: “uniformism”, “alternative-ism” and “exploitation-ism”.

Taking his cue from the Gospel reading of the day, which was from the 17th chapter of the Gospel according to St John, and contains Our Lord’s prayer for the unity of the Church, the Holy Father spoke of some people, who seem to have “one foot inside" and one foot outside the Church, so that they reserve “the possibility of being in both places,” both inside the Church and out of it. The Holy Father said that such as these do not really feel that the Church is their own. He said that there are some groups that, “rent the Church, but do not claim it as their home.” He identified three specific groups or kinds of Christians: he began with those, who would have everyone be equal in the Church, whom he called “uniformists”:

“Uniformity, rigidity – these are hard. They do not have the freedom that the Holy Spirit gives. They confuse the Gospel that Jesus preached, with their doctrine of equality. Christ never wanted His Church to be so rigid – never – and such as these, because of their attitude, do not enter the Church. They call themselves Christians, Catholics, but their attitude drives them away from the Church.”

The second group or kind of Christian the Holy Father identified is made up of those who always have their own ideas about things – people who do not want to conform their minds to the mind of the Church.  The Pope called these, “alternativists”:

"[They] enter the Church, but with this idea, with that ideology, and so their membership in the Church is partial. They have one foot out of the Church. The Church is not their home, not their own, either. They rent the Church at some point. Such as these have been with us from the beginning of the preaching of the Gospel: think of the Gnostics, whom the Apostle John beats so roundly, right?  ‘We are ... yes, yes ... we are Catholics, but with these ideas - alternatives.’ They do not share that feeling of belonging to the Church.”

The third is made of those, who call themselves Christians, but do not come from the heart of the Church. These are the “exploitationists” he said, “those who ‘seek the benefits’, and go to church, but for personal benefit, and end up doing business in the Church”:

“The businessmen. We know them well! They, too, have been there from the beginning: think of Simon Magus, or Ananias and Sapphira. They took advantage of the Church for their own profit. We see them in the parish or diocesan community, too, in religious congregations, among some benefactors of the Church – many, eh? They strut their stuff as benefactors of the Church, and at the end, behind the table, they do their business. These, too, do not feel the Church as a mother, as their own."

Pope Francis went on to consider that, in the Church, “There are many gifts, there is a great diversity of people and the gifts of the Spirit.” The Lord,” said Pope Francis, tells us, “If you would enter the Church, do so out of love,” in order “to give all your heart and not to do business for profit.” The Church, he remarked , “is not a house to rent,” the Church “is a home to live in.”

“We are all different,” he noted, “we are not the same, thank God.” Otherwise, "Things would be hellish.” The Pope went on to say, “We are all called to be docile to the Holy Spirit.” Precisely this docility, the Pope said, “is the virtue that will save us from being rigid, from being alternativists, or exploitationists – or businessmen in the Church: being docile to the Holy Spirit.” It is precisely " this docility that transforms the Church from a rented house, into a home.”