Saint John XXIII: a witness to his last words 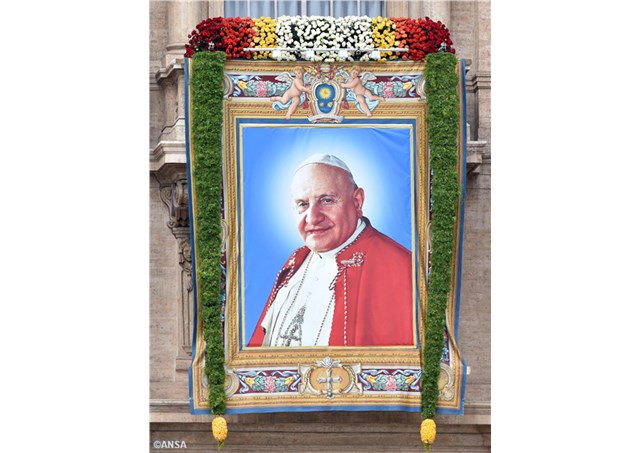 (Vatican Radio ) On the evening of June 3, 2014 Holy Mass was celebrated in the northern Italian town of ‘Sotto Il Monte’ birth place of  Angelo Roncalli, John XXIII. It’s  a moment to remember this much loved  pope, who died fifty-one years ago in the presence of his personal secretary Loris Capovilla  who was created cardinal by Pope Francis this year.

Veronica Scarisbrick brings you the words of  Cardinal Capovilla who describes that moment:

“ I said to him Holy Father there are only a few of us here in this room, but if you were to  look out of your window on to the square you’d see crowds  of people. I thought he’d reply in his usual reserved manner, instead of which he remarked: “ naturally that’s the way it should be the Pope is dying, I love them, they love me”.

Saint John XXIII has gone down in history as  the ordinary man who astonished the world, by launching the Catholic Church into one of its most momentous epochs by calling the Second Vatican Ecumenical Council. But according to Cardinal Capovilla to describe Pope John all you need to say is:

“Two eyes and a smile, innocence and goodness”.

Pope John’s personal secretary has often highlighted how rather than cultivate nostalgia our new Saint was wont to look towards the future. Asked to illustrate this  concept  he says :

“We are not custodians of a shrine, a reliquary or  a museum. As Pope John himself said we are called to cultivate a garden where the seed of the Word, of the Word Incarnate is set in an effort to foster  the Advent of a New Pentecost, a new Easter, a new Spring. Not just for our personal happiness but for the happiness of all of humanity. It’s a long journey, we are far from our final  destination, one  that is not there merely to safeguard but  to share with  the people of  the world”.

Referring to the recent encyclical of Pope Francis, ‘Evangelii Gaudium’, Cardinal Capovilla specifies how the gospel is the good news. But he adds:

“What is this good news? It’s that I am a son of God and God does not abandon me. It’s wonderful to hear the pope say almost every day that God does not reject anyone but accepts everyone”.