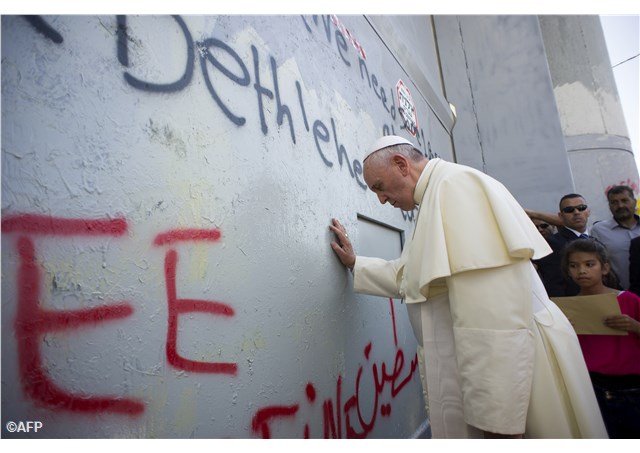 (Vatican Radio)  Pope Francis’ May 24-26 trip to the Holy Land generated a huge global conversation on social media.  Tracked in real-time by the Italian firm Datalytics, the microblogging platform Twitter registered a global volume of 116,804 tweets in the English language around the connected world.

An iconic photo of Pope Francis laying his hand on Israel’s separation wall on his way to Bethlehem Sunday was the most shared tweet during the visit, followed by an image of the pontiff kissing the hands of Holocaust survivors at Jerusalem’s Yad Vashem memorial.  Another popular retweet: a selfie with the Pope taken by a female Italian journalist aboard the papal plane en route from Rome to Amman, Jordan May 24th.

Nearly 70% of the tweets came from the accounts of men and the biggest numbers of posts came from North America and Europe and to a lesser degree, from Israel and Palestine. By far, tweeted sentiments about the Pope, reports Datalytics, were positive, as were comments about the Holy Land trip in general, with spikes during his visits to Jordan, Bethlehem and to Jerusalem’s Holocaust memorial.

Datalytics shows the most evident spike in the social buzz came on May 25th during the Pope’s visit to Bethlehem where he met Palestinian President Mahmoud Abbas, local political and religious authorities and celebrated a big outdoor mass in Manger Square.

Positive comments were especially generated by Pope Francis’ May 24th words of thanks to Jordan for welcoming so many Syrians who had fled the conflict in their homeland.

In fact, tweets on May 24th illustrate just how much concern was focused on the Syrian conflict.  Some of the most tweeted “word clouds” generated during the Pope’s visit to Jordan consisted of:  “Syrian refugee, first leg, refugee crisis, Mideast trip,” and “welcoming Syrian.”