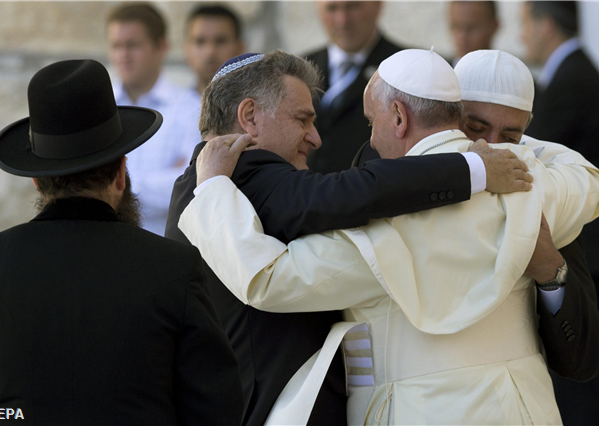 (Vatican Radio) As the three day Apostolic journey of Pope Francis to the Holy Land which took him to Jordan, Palestine and Israel comes to an end Philippa Hitchen brings us an overall picture of this visit in which she focuses on  ecumenical and interfaith hope.

The stated reason for Pope Francis’ visit to Jordan, Israel and Palestine was to commemorate the 50th anniversary of Pope Paul VI’s pilgrimage to the region and his revolutionary gesture of reconciliation with the leader of the Orthodox world, Ecumenical Patriarch Athenagoras of Constantinople. And the meeting in the Church of the Holy Sepulchre of the current successors of St Peter and St Andrew, their signing of a joint statement, their warm embrace and their shared prayers with leaders of  all the other Christian churches are an encouraging sign that, maybe, ecumenical dreamers like me are actually on the right track. No-one’s talking here about Christian unity overnight, and maybe not even in my lifetime. But seeing these age-old enemies forging new friendships and worshipping together at the place where the Church began will, I’m sure, sow many seeds of progress for the years to come.

But wasn’t all that ecumenical stuff somewhat overshadowed by the stunning political twists and turns that have made news headlines over the last 3 days? Won’t this journey be remembered more for the Pope’s unscheduled stop at the grim, graffiti-covered separation barrier en route to Bethlehem for Mass in Manger Square? Or his surprise invitation to the Palestinian and Israeli presidents to come to his “home in the Vatican” to pray for peace in the region? Or even his off-the-cuff remarks in Amman, close to the banks of the River Jordan, where he appealed for a conversion of hearts of those “criminals” who make and sell weapons that continue to fuel conflicts in Syria and Iraq?

Not at all, says Kurt Koch, the cardinal who heads the Vatican’s Council for Christian Unity and its Commission for Religious Relations with Jews. The pope has brought with him to Jerusalem a courageous vision of peace which is indeed centred on reconciliation with the Orthodox world. But the achievement of that unity, the cardinal continues, especially the unity we seek around the table of the Lord, is intimately connected with the broader interreligious context. Since reconciliation is the message of the Eucharist at the heart of our Christian faith, it logically follows that this has a knock-on effect into the realm of politics as well.

I firmly believe the master stroke ahead of this trip was Pope Francis’ idea of bringing his friends from Argentina, Jewish Rabbi Abraham Skorka and Muslim Professor Omar Abboud with him to better understand the complex political and religious problems the region. And as the papal plane takes off again this evening, the lasting image I’m taking away from Jerusalem is the sight of the pope and his two friends with tears in their eyes, arms clutched around each other’s shoulders, daring to hope that peace really is possible, even in this troubled Holy Land.