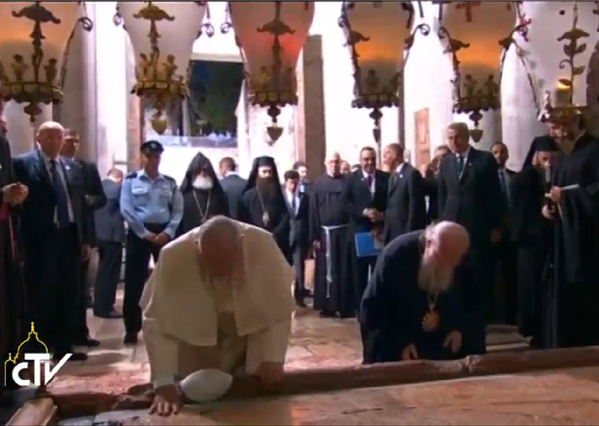 (Vatican Radio)  Pope Francis lamented the “tragic” divisions between Christians and said our disagreements must not frighten us and paralyse our progress towards unity.  His remarks came Sunday during an ecumenical prayer service held with the Ecumenical Patriarch Bartholomew I and other Christian leaders in Jerusalem’s Basilica of the Holy Sepulchre.   Earlier Pope Francis and the Patriarch held private talks and signed a common declaration pledging to continue along the path towards full unity between the Catholic and Orthodox Churches.

Ecumenical Celebration in the Basilica of the Holy Sepulchre

In this Basilica, which all Christians regard with the deepest veneration, my pilgrimage in the company of my beloved brother in Christ, His Holiness Bartholomaios, now reaches its culmination. We are making this pilgrimage in the footsteps of our venerable predecessors, Pope Paul VI and Patriarch Athenagoras, who, with courage and docility to the Holy Spirit, made possible, fifty years ago, in this holy city of Jerusalem, an historic meeting between the Bishop of Rome and the Patriarch of Constantinople. I cordially greet all of you who are present. In a special way I express my heartfelt gratitude to those who have made this moment possible: His Beatitude Theophilos, who has welcomed us so graciously, His Beatitude Nourhan Manoogian and Father Pierbattista Pizzaballa.

It is an extraordinary grace to be gathered here in prayer. The empty tomb, that new garden grave where Joseph of Arimathea had reverently placed Jesus’ body, is the place from which the proclamation of the resurrection begins: “Do not be afraid; I know that you are looking for Jesus who was crucified. He is not here, for he has been raised, as he said. Come, see the place where he lay. Then go quickly and tell his disciples, ‘He has been raised from the dead’” (Mt 28:5-7). This proclamation, confirmed by the testimony of those to whom the risen Lord appeared, is the heart of the Christian message, faithfully passed down from generation to generation, as the Apostle Paul, from the very beginning, bears witness: “I handed on to you as of first importance what I in turn had received: that Christ died for our sins in accordance with the Scriptures, and that he was buried, and that he was raised on the third day in accordance with the Scriptures” (1 Cor 15:3-4). This is the basis of the faith which unites us, whereby together we profess that Jesus Christ, the only-begotten Son of the Father and our sole Lord, “suffered under Pontius Pilate, was crucified, died and was buried; he descended into hell; on the third day he rose again from the dead” (Apostles’ Creed). Each of us, everyone baptized in Christ, has spiritually risen from this tomb, for in baptism all of us truly became members of the body of the One who is the Firstborn of all creation; we were buried together with him, so as to be raised up with him and to walk in newness of life (cf. Rom 6:4).

Let us receive the special grace of this moment. We pause in reverent silence before this empty tomb in order to rediscover the grandeur of our Christian vocation: we are men and women of resurrection, and not of death. From this place we learn how to live our lives, the trials of our Churches and of the whole world, in the light of Easter morning. Every injury, every one of our pains and sorrows, has been borne on the shoulders of the Good Shepherd who offered himself in sacrifice and thereby opened the way to eternal life. His open wounds are the cleft through which the torrent of his mercy is poured out upon the world. Let us not allow ourselves to be robbed of the basis of our hope! Let us not deprive the world of the joyful message of the resurrection! And let us not be deaf to the powerful summons to unity which rings out from this very place, in the words of the One who, risen from the dead, calls all of us “my brothers” (cf. Mt 28:10; Jn 20:17).

Clearly we cannot deny the divisions which continue to exist among us, the disciples of Jesus: this sacred place makes us even more painfully aware of how tragic they are. And yet, fifty years after the embrace of those two venerable Fathers, we realize with gratitude and renewed amazement how it was possible, at the prompting of the Holy Spirit, to take truly significant steps towards unity. We know that much distance still needs to be travelled before we attain that fullness of communion which can also be expressed by sharing the same Eucharistic table, something we ardently desire; yet our disagreements must not frighten us and paralyze our progress. We need to believe that, just as the stone before the tomb was cast aside, so too every obstacle to our full communion will also be removed. This will be a grace of resurrection, of which we can have a foretaste even today. Every time we ask forgiveness of one another for our sins against other Christians and every time we find the courage to grant and receive such forgiveness, we experience the resurrection! Every time we put behind us our longstanding prejudices and find the courage to build new fraternal relationships, we confess that Christ is truly risen! Every time we reflect on the future of the Church in the light of her vocation to unity, the dawn of Easter breaks forth! Here I reiterate the hope already expressed by my predecessors for a continued dialogue with all our brothers and sisters in Christ, aimed at finding a means of exercising the specific ministry of the Bishop of Rome which, in fidelity to his mission, can be open to a new situation and can be, in the present context, a service of love and of communion acknowledged by all (cf. JOHN PAUL II, Ut Unum Sint, 95-96).

Standing as pilgrims in these holy places, we also remember in our prayers the entire Middle East, so frequently and lamentably marked by acts of violence and conflict. Nor do we forget in our prayers the many other men and women who in various parts of our world are suffering from war, poverty and hunger, as well as the many Christians who are persecuted for their faith in the risen Lord. When Christians of different confessions suffer together, side by side, and assist one another with fraternal charity, there is born an ecumenism of suffering, an ecumenism of blood, which proves particularly powerful not only for those situations in which it occurs, but also, by virtue of the communion of the saints, for the whole Church as well.

Your Holiness, beloved brother, dear brothers and sisters all, let us put aside the misgivings we have inherited from the past and open our hearts to the working of the Holy Spirit, the Spirit of love (cf. Rom 5:5) and of truth (cf. Jn 16:13), in order to hasten together towards that blessed day when our full communion will be restored. In making this journey, we feel ourselves sustained by the prayer which Jesus himself, in this city, on the eve of his passion, death and resurrection, offered to the Father for his disciples. It is a prayer which we ourselves in humility never tire to make our own: “that they may all be one… that the world may believe” (Jn 17:21).