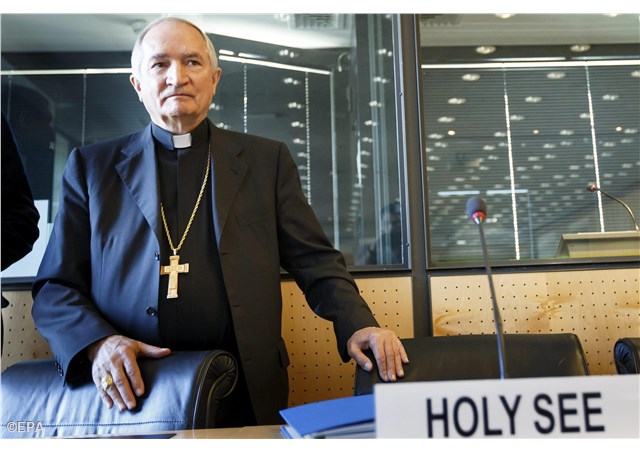 (Vatican Radio) The Holy See has responded to the Concluding Observations of the Committee of the UN’s Convention Against Torture on the Holy See’s Initial Report. The Holy See has issued a Communiqué saying that the Observations contain several positive elements, as well as some few points that require further clarification and elucidation.

Click below to hear the Permanent Observer of the Holy See to the UN in Geneva, Archbishop Silvano Tomasi's extended remarks to Vatican Radio

Below, please find the full text of the Communiqué from the Holy See

Communique from the Holy See

The Committee for the Convention against Torture (CAT) has released an advanced unedited version of its Concluding Observations on the Initial Report of the Holy See.  These Observations recognize that the Holy See has made many serious reforms in its procedures for dealing with the crime of torture and other cruel, inhuman or degrading treatment.

The Concluding Observations include many positive outcomes that reflect the Committee’s acknowledgement of the good faith efforts of the Holy See to comply with the CAT, to institute reforms to prevent sexual abuse; and to compensate and facilitate the care and healing of the victims of sexual abuse. These positive outcomes include:

·         The Committee rejected as well the interpretation that would treat efforts to restrict or ban abortion as a form of torture or cruel, inhuman or degrading treatment or punishment under the Convention, thus safeguarding the fundamental human right of freedom of religion and opinion and the protection and promotion of human life.

·         The Committee did NOT expressly conclude that, in and of itself, rape or sexual abuse by individual non-state actors constitutes torture or cruel, inhuman or degrading treatment or punishment under the CAT. Nevertheless, many of the Observations make reference to sexual abuse, which the Holy See condemns as a serious crime and grave violation of human dignity.  Regrettably, there appears to be an implicit fundamental assumption throughout the Observations that any sexual abuse is equivalent to, or a form of, torture as defined in the CAT.  Such an assumption is neither supported by the text of the CAT nor has it been accepted to date by human rights authorities.  Such an assumption would attempt to treat allegations of sexual abuse as allegations, which then presumably violate the CAT.  For this reason, the underlying assumption is fundamentally flawed, misleading, and ultimately counter-productive.

Bearing in mind that the role of the Committee is simply to monitor and report, and not to adjudicate, much less to create “jurisprudence“, there are some observations that should be noted.

First, while recognizing that the CAT applies to Vatican City State, the Observations give the impression that all the priests serving around the world are indirectly legally dependent from the Vatican, something that neither recent legislative amendments enacted by the Holy See nor the Interpretative Declaration – accepted at the moment of ratification – imply.

Second, there are specific cases and demands for which the Committee would like to receive more detailed information.  The Holy See takes note and will give serious consideration to these recommendations.

In conclusion, the Holy See reiterates its willingness to implement in an effective way the Convention against Torture and in the spirit of this Convention will continue to develop and to enact measures that will prevent any cruel and inhuman behavior and support, as it has already done through enormous financial assistance and human solidarity, all victims.